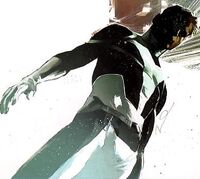 Victor Rios' life before joining the Weapon K is largely unknown. His earliest memory is waking up in the Weapon K facility alone and having a hatred for one man, Tyson Rios.

Taking the name Warlord, Vick left the facility to locate and kill Tyson Rios. He soon found Tyson in a Chinese monastery. Instead of luring him out, Warlord just destroyed the entire building. Tyson was no where to be found so Warlord left China. Warlord then used his newfound power to lure out Tyson, but he created a paradox. Warlord was able to make the paradox only affect Crimson Shadow. Warlord fought Tyson once he showed up. Warlord then killed him after a short battle and cast a spell to keep Tyson from coming back to life. One year later Warlord created an army to take over and destroy the world.

While his army was conquering, Warlord found that Crimson Shadow had come back to life. Warlord tried to aid his army but it was destroyed. Warlord was then grabbed by Tyson and thrown into space. The two then fought. The battle ended when Warlord was blasted into the sun by Tyson.

Warlord did not die when he was blasted into the sun because he made a shield around himself. He stayed in space and cast a spell on himself. The spell caused him to die, but it would also cause him to be reborn as a stronger being. One year later Warlord was reborn in a new, stronger form. Warlord then brought his army back to life and he made them stronger. Soon afterwards he went to Earth and was attacked by Crimson Shadow and an army of super heroes. Warlord was again defeated by Crimson Shadow, but he managed to get to a safe place.

Warlord came back when he found out that Tyson's powers were further mutating. Warlord found Tyson and captured him. He experimented on Tyson and made an evil clone, Onslaught. Warlord then released them both so that they could fight each other. Warlord wanted to see the clone's abilities so he had the clone blow himself up to kill Tyson. They both came back to life and Tyson fled. Warlord ordered Onslaught to go after Tyson but he refused. The clone left before Warlord could attack him.

A few months after, Warlord went to Ricardo's high school and attacked him. Some heroes came to Ricardo's rescue, including Crimson Shadow, and Warlord was overwhelmed. He was defeated and sent to the Negative Zone, but he grabbed Crimson Shadow and took him. They fought, but they were getting weaker. Warlord was still stronger than Tyson so he had the upper hand. Warlord almost won, until Tyson was pulled out of the Negative Zone. Warlord cast a spell to teleport himself out of the Negative Zone. Soon afterwards he was attacked by his son, Captain X. Warlord fought back and destroyed Captain X's Asguardian armour. He sent a blast towards Captain X, but he reflected it with his shield and the blast killed Warlord. Before Warlord died he cast a rebirth spell and was brought back, but somewhere in space. Warlord is now searching for his family so that he can finally kill them.

While searching for his family, Warlord came across a small meteorite. He knew that it contained a dormant alien. He took it back to his lab so that he could identify the specimen. He identified the specimen as a symbiote. Warlord wanted to harness its power, so he cast a spell on the symbiote keeping it dormant so he could have total control over its actions. Warlord thought about using the symbiote on himself but he knew there was a better way it could destroy Crimson Shadow's family.

Warlord searched for Guardian so he could experiment on him. He found him and he easily defeated him by attacking him from behind. After capturing Guardian, Warlord took him back to his lab. When he brought Guardian to his lab, Warlord started to brainwash Ricardo. Soon after Guardian was under Warlord's control. Warlord then injected Guardian with the symbiote. A new symbiotic being was born.

Warlord sent his new creation lose into the city, knowing that Tyson would soon intervene. He followed the symbiote to watch him destroy the city. As the Symbiote was destroying the city Crimson Shadow attacked the Symbiote. The two fought and Warlord told Rick to stop fighting. Once he did the Symbiote was blasted by Tyson, into a building. The Symbiote was impaled on steel rods. Warlord knew this was the perfect opportunity to reveal Rick. When Tyson got close to him, Vick had the Symbiote reveal its face to him. Then Warlord left the two alone.

Soon after, Vick went to check up on his pawn and he found him alone. Warlord told Rick to cause as much misery as he could to the world. Warlord knew that Misery was fighting a losing battle against Crimson Shadow and Weapon Omega, so he was ready to help him fight. Before he left, Warlord was visited by Onslaught. Warlord told him about the fight and Onslaught agreed to help him. They arrived at the same time as Captain X. Onslaught attacked Tyson, Warlord went after his son, and Misery fought Weapon Omega. During the battle, Onslaught created a field of unstable energy that pulled everyone in. The field imploded severely injuring everyone. Soon after, S.H.I.E.L.D. arrived and took everybody. Warlord was locked up in the Negative Zone along with Onslaught.

The Negative Zone may strip Warlord of his powers but he still has his knowledge of sorcery. Warlord used this to his advantage by bringing a guard into the Zone with him and taking him hostage. Another guard came by and he followed Warlord's commands. The guard released Warlord to try and save his friend, but as soon as he was free he killed them both. Warlord went to Onslaught's cell and set him free so they could both get their revenge.

Warlord released Onslaught so that he could serve as a distraction. Once Onslaught was gone, Warlord started to recreate his human body. He transferred his being into the body and his energy form dispersed. He took a guard uniform and preceded to walk out of the containment facility. His plan worked as the other guards believed that he was just patrolling. He left and preceded to located his brother.

Warlord's reason for changing is because it would give him the chance to get closer to his brother and learn his weaknesses. He decided to create a new identity using his real name, but he would not create a secret identity. This could persuade Tyson to reveal himself as well.

When Victor made it back to his hideout he was met by two Onslaughts. Vick was proud of his creation for this new change. He asked Onslaught what his plan was, but he responded by punching his creator. Victor was enraged and he teleported Onslaught into the sun. The second Onslaught grabbed onto Vick and began absorbing his energy. Victor grew weaker, but he managed to throw Onslaught off of him. He fired an energy blast at Onslaught's head, effectively killing him.

Vick was fatigued and he fell on his knees. He didn't understand how his energy levels were depleting. Suddenly more Onslaughts appeared and they were over-flowing with power. Vick knew he couldn't stand a chance in his current state, so he teleported himself away. He ended up in New York face to face with his brother against an army of Onslaughts....more...

During the battle, Warlord realized that he could have been killed at any moment, but Crimson Shadow kept that from happening. He even found himself coming to his brother's aid. He had a change of heart and decided to join Crimson Shadow's new team, to see if being a hero suited him. Victor abandoned his plan of exposing his brother's identity and remained as Warlord for the time being.

While apart of the New Defenders, Victor remained loyal to his team and his powers still were fluctuating. He realized that something must have been effecting the universe on a reality-altering level. It wasn't until, Phoenix, sensed the presence of the cosmic being known as Proteus. He was crossing over into their universe from an alternate one. The team gathered at the location of his arrival and prepared to face him. The New Defenders were not prepared to face the cosmic threat as he quickly defeated them. Proteus was seemingly destroyed when Crimson Shadow sacrificed himself.

With his brother gone, Victor felt that he should be the one to take his place. The Defenders needed a leader and the team felt Warlord was the reasonable choice to replace Crimson Shadow. As the face of the team, Victor created a new persona that reflected his new life and position. He was know known as Guardian and took his place as a protector of Earth.

Retrieved from "https://marvelcomicsfanon.fandom.com/wiki/Vick_Rios_(Earth-616)?oldid=26778"
Community content is available under CC-BY-SA unless otherwise noted.