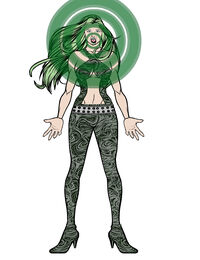 Prior to further tutelage and experimentation under Nathaniel Essex, Vertigo knew only how to access the vocal disorientation/unconsciousness facets of her power. After training and working for Essex, Vertigo learned the greater potential of her sonic screaming abilities.

Vertigo possesses the normal human strength of a woman of her age, height, and build who engages in moderate regular exercise.

Retrieved from "https://marvelcomicsfanon.fandom.com/wiki/Veronica_Savage_(Earth-515)?oldid=189446"
Community content is available under CC-BY-SA unless otherwise noted.