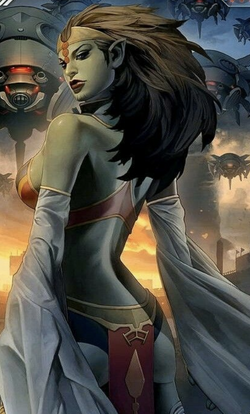 We are not refugees to be given mercy or pity. The Skrulls will survive on our own, and we will thrive.

Veranke is the daughter of the Skrull soldier Talos. As she grew up, she came to admire her father and desired to join the Kree-Skrull War, but was always forbidden to by her parents. She had a lust for power and control, and felt stifled.

After Skrullos was destroyed by Galactus, Veranke managed to save a large portion of the Skrulls and take them away from the planet in a space ark. She eventually discovered that her father had the same idea and brought another horde of Skrulls to Earth in order to join S.W.O.R.D. Veranke saw this as her opportunity to stop following her father's example, and she took control of her faction of Skrulls, becoming the new Empress.

She then began concocting a plan to infiltrate the Earth in a form of secret invasion. They set up shop on a barren moon within the Earth's solar system and dubbed it "Skrullos II", which was eventually discovered by S.W.O.R.D. Talos led the expedition and tried to convince his daughter to join him and accept humanity's kindness, but she refused and even went so far as to attempt to kill him. This instead resulted in most of her men becoming captured, but she was able to escape in a pod, living to plot another day.

Retrieved from "https://marvelcomicsfanon.fandom.com/wiki/Veranke_(Earth-101)?oldid=250531"
Community content is available under CC-BY-SA unless otherwise noted.