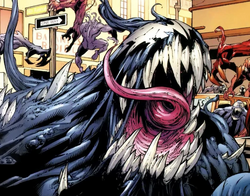 The planet Klyntar is ripe with symbiotic beings of the same name, with the need to bond to a living host in order to take them over and survive. One such symbiote, however, believed in the harmony of working alongside a host, which drove its race to exile it.

The symbiote eventually arrived on Earth after attaching itself to a spacecraft being piloted by John Jameson. It was quickly discovered and transferred into the care of Dr. Curt Connors to study it. However, the symbiote soon found itself bonding to his intern, Peter Parker, who was also the vigilante known as Spider-Man.

For some time Peter and the symbiote worked together in harmony, but when Peter discovered it had been using his body while he was asleep and increasing his aggression, he sought to remove it. Spider-Man went to a church and used the vibrations from the bell to remove the symbiote, but it quickly discovered Eddie Brock down below.

Brock had been harboring a hatred for both Spider-Man and Peter Parker, so the symbiote bonded with him and revealed the truth to him. Enraged, Brock and the symbiote dubbed themselves Venom and quickly became one of Spider-Man’s fiercest enemies.

However, Brock would eventually be killed by Kraven the Hunter, who then forced Venom to bond with him. Kraven used Venom’s power to break into Wakanda in an attempt to steal Vibranium, but in the chaos, Wakanda’s prisoner, Cull Obsidian escaped and the Guardians of the Galaxy arrived to stop him.

Gamora succeeded in decapitating Kraven, leaving Venom without a host. It bolted towards Cull Obsidian, but was intercepted by Groot, who became Venom’s new host. Venom enjoyed Groot’s power and decided to stay with him and the Guardians. As they traveled across space, Venom came to appreciate what it meant to be a hero, and valued Groot very highly.

The Guardians would eventually team up with the Avengers during a battle against the Black Order, and in the process Venom and Groot were forcibly separated by the Grandmaster. But Spider-Man was there, and Venom renewed their bond, promising to Peter that it was reformed and just wanted to help.

Peter was hesitant to trust the symbiote, but agreed to bond and managed to help the Avengers fend off the Black Order. Venom then returned to Earth with Spider-Man, who instead offered Venom the chance to bond with his friend, Flash Thompson, who had lost his leg thanks to Carnage, Venom’s offspring. Feeling sorrowful for Flash, Venom agreed and joined with him, becoming Agent Venom, the leader of the Thunderbolts.

Varies Depending on Host

Retrieved from "https://marvelcomicsfanon.fandom.com/wiki/Venom_(Klyntar)_(Earth-101)?oldid=250681"
Community content is available under CC-BY-SA unless otherwise noted.