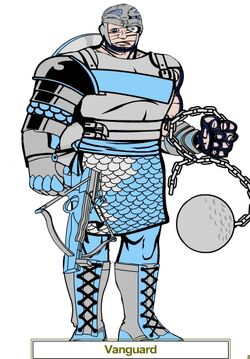 Move, or I'll move you for ya'

Vladislav was brought up by a traveling circus in rural Ukraine along with his brother, Viktor. The circus performers taught Viktor the art of the hammer throw, and the precision skill of archery, as he was the strongman in the circus. One day, while putting on a show in Pripyat, Ukraine, Viktor was kidnapped by an unknown assailant. Viktor was able to escape, but walked into the blast area of the Chernobyl disaster, and went missing. Vladidslav, thinking his brother dead, went on a hunt for the mystery kidnapper. Once finding the man, Vladislav learns that his brother was kidnapped by a leader of a mercenary group. Vladislav kills the man, and effectively takes over his organization, reigning terror across Ukraine. Viktor, after recovering, hears of his brother's power madness and confronts him. Both brothers then take control of the group, and rename it the United Mercenary Coalition. Viktor, with his newfound powers, enhances Vladislav's strength to ten times it's original level, and the pair effectively become two of the most infamous mercenaries on the planet.

Vanguard is extremely strong, thanks to an enchantment by his brother, Showman. Also thanks to his brother, is his extreme healing factor, meaning Vladislav can take many bullets before even slowing down.

Extremely proficient with the ball-and-chain, and expert marksman.

Vladislav is, after all, human, and will succumb to injury after a while. Cybernetic headgear can not be damaged, otherwise Vladislav will lose control of his motor functions.

Vladislav got his cybernetic headgear after a failed robbery and was close to death. The only thing holding his skull together is the gear.

Retrieved from "https://marvelcomicsfanon.fandom.com/wiki/Vanguard_(Earth-616)?oldid=41086"
Community content is available under CC-BY-SA unless otherwise noted.