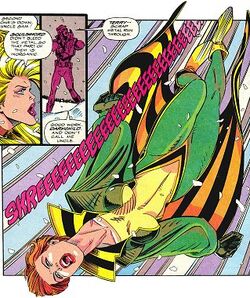 On Earth-1175, Deadpool and Siryn were both founding members of Cable's X-Force. They both had mutual feeling for each other. Deadpool saw Siryn as what he could have had, had he not entered Weapon X. Siryn was his dream girl, who he felt he could no longer have, due to his scars and personality. Siryn saw him as the misunderstood outcast, who nobody liked for a minor quirk. When their awkward interactions started affecting their performance in the field, Cable read their minds and revealed to them the truth. They immediately quit the team, and decided to work on their relationship. Vanessa came along in about a year's time.

Vanessa was raised for a time on her mother's mansion in Ireland. She loved being there, but she was restrained by her mother. She was told that she should use her powers only when necessary, and should be kind and polite to all she talked to. Her father, however, thought she had a right to be free once in a while, and just be able to cut loose a little. After a fight over this, her father left and joined the X-Men. Something inside Vanessa snapped then, and she became insane. She flew to her father and stayed with the X-Men and trained. Her mother eventually joined them as well, though against her better judgement. Deathshriek began training with her father, and grew closer to him. She was accepted onto the X-Men when the adults retired.

During the Skrull invasion, her scream proved a potent power, and she almost knocked out a Skrull single-handedly. But she ended up captured anyways. She was heavily drugged by her captors, as they feared her more than any of her other teammates. She was released by the reserve team of X-Men, and she, the rest of her team, and the Avengers began fighting the Skrulls. Her unpredictability made her a lethal weapon against the Skrulls, and she was able to take out 5 Skrulls. After the battle, she went home with the X-Men.

Vanessa was trained in the use of many weapons by her father. She is also an expert in her powers, as well as general combat and assassination.

Insanity: Vanessa is mentally unstable, like her father, though to a greater extent due to her screams. She loves to kill, and is for all intents and purposes easily exploited in this fashion.

Retrieved from "https://marvelcomicsfanon.fandom.com/wiki/Vanessa_Wilson_(Earth-1175)?oldid=189436"
Community content is available under CC-BY-SA unless otherwise noted.