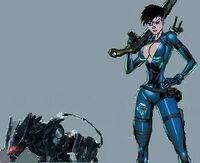 Single
Occupation
Vampire hunter, MI13 Agent, adventurer, CEO of Falsworth Industries, Agent of New Shield 2099
Education
University graduate, Trained by MI-13, Trained by Blade and Spitfire, New Shield 2099
Origin
Origin
Daughter of Blade and Spitfire with all of the vampire's strengths but none of their weaknesses, born in Maidstone, England.
Place of Birth
[[Maidstone, England.]]
Creators

Bang, another suck-head goes down!

Born in the 21st century in Maidstone, England, Lady Vanessa Brooks was born to heroes Lady Jacqueline Falsworth (Spitfire) and Eric Brooks (Blade). She was born like a normal human baby because both parents were half human. She showed no powers at all, just being a normal little girl with blue eyes like her mother and black hair and skin tone of her father.

At the age of 13, her life changed. Heading home to Falsworth Manor after gymnastics class after the sunset, the family car was attacked by vampires and they wanted Vanessa, calling her the new Eve. Both Blade and Spitfire went to work killing as many vampires as they could. Vanessa stayed in the car with her cyber wolf puppy named Wolf, a specially made toy/pet for her. When a vampire broke the window and grabbed Wolf, breaking the then toy/pet a change happened in Vanessa, she wasn't afraid, rather, she was angry. A fast and angry creature broke out through the car door with red eyes and fangs, and ripped out the throat of the vampire that hurt Wolf. She started attacking the nearest vampire in a primal rage, out of a hundred, only 10 were left. The vampires escaped into the shadows, Blade follows with weapons drawn, and Spitfire stays and talk slowly to her crying little girl.

The other family business

Vanessa trained with her father and mother everyday in order to learn about herself and her newfound vampiric powers. she had all of the vampire's strengths but none of their weaknesses. She had many enhanced physical attributes, psychic shielding, a regenerative healing factor, psionic gliding and mesmerism. Also, like her mother, she could control her blood lust and has no need to drink it. Wolf was repaired and was no longer just a toy puppy. He/it was now bigger and stronger and made for combat. The family went vampire hunting when Vanessa turned 17 and was ready. Blade had learned all he could about the group of vampires that attacked them four years ago. Der Blutsauger (the Children of Blood) were a cult lead by Baroness Blood and she appeared to be up to her old tricks. Vanessa fought against vampires and other supernatural threats, joining MI-13 (formerly MI-6), the department of British Intelligence which dealt with matters abroad, wanted to bring paranormal matters under their wing, the Prime Minister decreed that every British superhero now worked for MI-13.

Vanessa took the name Blade, and like her father is also called the Daywalker. She and Wolf now reside in America and work for New Shield 2099. She is also an acting liaison between New Shield and MI-13.

Being born of both Blade and Spitfire she has the following:

Immunity To Vampire Vulnerabilities: True vampires have numerous and very particular supernatural vulnerabilities, most of which Blade 2099 is totally immune to. For instance, she is unaffected by direct exposure to sunlight, whereas most vampires are either rendered comatose during the daylight hours or are quickly incinerated when exposed directly to sunlight. Vampires are also highly allergic to silver, supposedly because of the metal's mystical purity. As a result, silver blades or bullets are capable of killing vampires. If not killed, and merely injured, it will take a vampire much longer to heal than if the injury had been inflicted by another material. Blade 2099 herself could be injured by a silver weapon, much as an ordinary human would, but her healing powers would be able to heal it as if it were an ordinary wound. Blade 2099 is also immune to the effects of religious icons, such as crucifixes, whereas vampires are rendered almost powerless when confronted by them.

She is a highly trained assassin, skilled in long and short range combat. An exceptional natural athlete and fighter and has been trained by both her father Blade and her mother Spitfire in martial artist, she proficient in practically every form of weaponry known to man. She is also a trained pilot like her mother.

Blade 2099 possesses superhuman strength thanks to her vampiric state, lifting in excess of 1 ton. Thanks to her body's adaptions for running, her legs are stronger than her arms.

Retrieved from "https://marvelcomicsfanon.fandom.com/wiki/Vanessa_Brooks_(Earth-928.2)?oldid=155531"
Community content is available under CC-BY-SA unless otherwise noted.