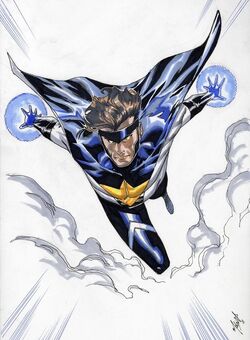 Penance's history is exactly the same as that of Earth-616's Justice up until the Marvel NEW! relaunch.

When Captain America began forming a new Avengers team for mutant-equality, he requested Justice's presence on the team for his service as a mutant Avenger. He accepted, because he realized he'd never stood up for his species as he should have. He took the new codename of Penance, and became an anti-hero, fighting those who persecuted mutants when not serving as an Avenger.

Telekinesis: Justice's powers are identical to those of his 616 counterpart:

Justice is a genius, with an eidetic memory.

Retrieved from "https://marvelcomicsfanon.fandom.com/wiki/Vance_Astro_(Marvel_NEW!)?oldid=171350"
Community content is available under CC-BY-SA unless otherwise noted.