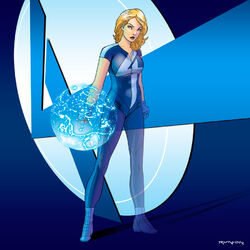 Valeria Richards has a similar history to her Earth-616 counterpart. Her conception in the Negative Zone made her a threat to herself and her mother, but on this world, the first time around, Doom helped with the baby's delivery, rather than on the 2nd try. The baby was still named Valeria, and things went on through a different course.

Valeria was mostly raised by her mom around the Baxter Building, in contrast to her brother being raised mostly by their father. Franklin was raised equally by both, and she was jealous of him for that. But they were the best of friends growing up, and they knew they would both get Iron Man suits if they weren't going to have powers. This became obvious that it wasn't the case when Franklin's powers manifested and took out New York City. Peter's powers were next, basing mostly off of his parents. Valeria soon gained her mother's force field power, and enjoyed training with it. But when her secondary mutation occurred, she turned into a housecat, and was raised by her parents for a week before she morphed back into her human self.

This kept happening for some time, and she eventually had to have a power dampening collar put on to prevent such a thing. She could only take it off when she trained with her powers. During this time, she grew even closer to her brother as a friend. She was the only one to see him leave to join the X-Men during the Skrull invasion, and this devastated her on the inside. She was resistant to Luna's joining the team, but eventually, she got over it. And she grew to be an asset to her team, despite hiding her anger and sadness inside.

Force Field Creation: Marvel Girl has the ability to create invisible force field constructs in any shape she can imagine. She can also create a platform on which she can appear to fly.

"Animorphing:" Marvel Girl has the ability to partially or totally morph into any animal native to Earth. She can also mimic the powers of human-animal hybrids. So, she could copy the powers of Wolverine or Tigra, for example. If she partially takes their form, she can assume certain traits, like the strength of a rhinoceros, or the claws of a housecat. Or, if she chooses, she can also totally become any animal she pleases, a bird, for example.

Retrieved from "https://marvelcomicsfanon.fandom.com/wiki/Valeria_Richards_(Earth-1175)?oldid=255234"
Community content is available under CC-BY-SA unless otherwise noted.