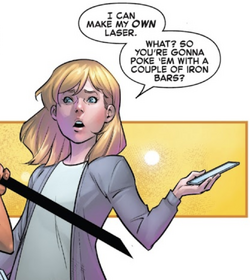 Really? It's taken you guys this long to figure out how to change the future?

After Franklin Richards was born, his parents, Mister Fantastic and the Invisible Woman took him and absconded into a series of pocket dimension to avoid the Prophecy of Infinity. During their travels, they ended up having another child, this time a daughter.

However, they had been followed into the pocket dimensions by Doctor Doom, who abducted the baby and held her hostage. Eventually, they were able to come to a deal, and Doom would return the baby so long as he got to name her. Reluctantly, they agreed to his terms, and brought their daughter, Valeria, with them.

She aged several years in the pocket dimensions, her intellect growing with every day. She eventually grew ecstatic to return to the real world, and study the occurrences that would lead to the Prophecy of Infinity coming true.

Retrieved from "https://marvelcomicsfanon.fandom.com/wiki/Valeria_Richards_(Earth-101)?oldid=250717"
Community content is available under CC-BY-SA unless otherwise noted.