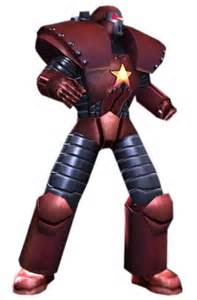 For unknown reasons, the Skrulls started the Secret Invasion on Earth. This Skrull posed as reformed armored supervillain Crimson Dynamo. The Skrull stormed the Hammer Industries HQ in New York City on the progress of the Dreadnought army. The interrogated Justin Hammer reveals the completion of the prototype. However, soon after the Skrull activated it, said prototype is destroyed by an Ultimate Alliance squad composed of Iron Man, Captain America, Whirlwind, and the Winter Soldier. This was a distraction to send the blueprints from Hammer's database to the Skrull mothership, before being incapacitated by the same team, destroying the armor; and Whirlwind delivers the final blow via created a partial whirlwind, fly up with the Skrull in his grasp, and chucking him down the roof breaking his back.

Retrieved from "https://marvelcomicsfanon.fandom.com/wiki/Valentin_Shatalov_(Skrull)_(Earth-6109.2)?oldid=122808"
Community content is available under CC-BY-SA unless otherwise noted.