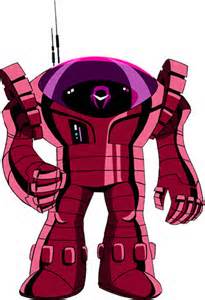 Little is known about Crimson Dynamo's life before the attack on the Omega Base. It can be assumed to be similar to his mainstream counterpart.

Valentin Shatalov was selected to join Doctor Doom's Masters of Evil. He assisted M.O.D.O.K. and Mysterio to attack the Omega Base in order to steal some blueprints of upgrades for Ultron, but he and his teammates failed as they were defeated by the Ultimate Alliance.

Shatolov reformed since then, but two years later he intercepted a communication between the Skrulls & their Crimson Dynamo imposter on Hammer Industries' progress on their Dreadnoughts. He contacted his old enemies on the matter, who then sent Iceman to his location. Wanting to protect the blueprints of any future Crimson Dynamo armors, Shatolov wanted Iceman to take him to the scene of the crime. After the Dynamo Skrull was dealt with, Shatolov decided to create a new Crimson Dynamo armor to make up for his the one destroyed to become an asset to the Ultimate Alliance against the Skrulls.

After a 2-week time jump, the UA tracks down the weapon shipments organized by the Skrulls to the San Diego Zoo. Dynamo, fellow Iron Man villain the Living Laser, Storm, and Iceman arrive at midnight. Backed up by X-Man Cyclops, the five are met with strong resistance. The team are once again confronted by Venom, the symbiote having detected someone in the vicinity, but he is once again defeated. During that debacle, Eddie Brock observes the heroes leave at a safe distance. The squad discover a secret bunker under the zoo, created by the Skrulls. Plowing through security, they discover supervillain team, the Ani-Men, stealing data about the Skrulls. During the resulting battle, the Ani-Men are forced to retreat at the arrival of Sinister Six member: the Lizard; who sent as a reinforcement by his leader Doctor Octopus. The six superhumans make their way into a weapon creation lab, run by Skrullian assassin & scientist X'iv. Not ready for their arrival, he is forced to release mind-controlled supervillain Iguana upon them. While Iguana is defeated: X'iv manages to evacuate the lab, with the team pondering how the Ani-Men knew about the Secret Invasion. Back at the base, Stegron is waiting. The dinosaur man at first didn't want to be involved in the Secret Invasion; but changed his mind out of a desperate need of a cure.

Shatalov is an accomplished military leader, and has been studying on mechanical engineering & previous Crimson Dynamo armors (their designs & capabilities).

Equipment: Shatalov used the newest Crimson Dynamo armors, believed to be MK V. He also retained versions of the older Dynamo armors. Previously he had an 'armor matrix' added to his belt that could form the armor around him when activated.
Transportation: None known.
Weapons: Crimson Dynamo Armor MK V

Retrieved from "https://marvelcomicsfanon.fandom.com/wiki/Valentin_Shatalov_(Earth-6109.2)?oldid=183816"
Community content is available under CC-BY-SA unless otherwise noted.