Start a Wiki
Hello everyone. This is David. Most of you probably don´t know me. I´m new here (well sort of) and I´m here to present my newest project, Earth-3000. This new earth answers to a very important question. What if Gwen Stacy was alive? This was already explored in one issue of What If? but I still decided to do my take on this topic.

The moment when Gwen Stacy died at the hands of the Green Goblin and Spider-Man, remains one of the most devastating and important moments in comic history. It made Spider-Man and the entire Marvel franchise what is it today and that´s why I am so eager to write about it. I hope you enjoy.

In Earth-3000, Gwen actually dies, much like in the original comics. She is captured by the Green Goblin, aka Norman Osborn who plans to use her against Spider-Man, his most hated enemy. As the battle ensues, Gwen is dropped from the bridge onto to the ground with death awaiting her but Spider-Man comes to the rescue, only to kill her before she hits the ground by breaking her neck. Gwen Stacy was dead...

But in comics not everything is what it appears. Three weeks later, the Kingpin (Wilson Fisk) was facing unprecedented competition from Osborn who was claiming the criminal world for himself. Determined not to lose his control over the empire he had built over the years, he planned the murder of Norman Osborn but needed someone to execute it. Every agent he sent perished under the deranged scientist and Kingpin, as a last resort, relied on Gwen Stacy, the young girl who had died at Osborn´s hands while he was the Green Goblin. Using Alistair Smythe´s technology, they managed to revive Stacy. Her sanity suffered a bit but well, she was still alive. After this, she was trained for months by the Kingpin´s soldiers until she was finally sent to do her duty. Upon entering Osborn´s house however, she didn´t find him, she found something else.... something that would change everything forever.

After Gwen´s death, S.H.I.E.L.D. became increasingly powerful and defensive, determined not to let any other accidents like this happen again. They gained the support of many agencies, politics and superhero teams such as the Fantastic Four and the Avengers, but Peter Parker, shaken even more by Gwen´s death, opposed them bitterly. Spider-Man´s negative opinion greatly influenced S.H.I.E.L.D´s plan and diminished their influence upon national and international affairs. Due to this, Parker had to be delt with. Deputy Director Maria Hill sent Peter to the Negative Zone and he was replaced by Agent Barton (or known by his superhero name, Hawkeye) in what would become known as S.H.I.E.L.D´s Project: Spider-Man. Of course, Peter would return, but his return was not what was expected...

"With Great Power, comes Great Fun." - Clint Barton, Hawkeye was the agent selected to substitute Peter Parker after he was sent to the Negative Zone. He adopted a Black and White costume and was granted similar spider-like powers. To the eyes of the entire world, it was as if nothing had changed. Of course, by being Spider-Man, all of the web slinger´s enemies were his as well. 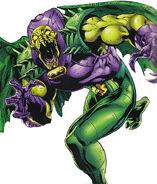 "If only I had done something..." - Peter Parker is the living proof that living in the Negative Zone is a difficult task. In fact, the only way he survived was by fusing himself with the zone´s supreme ruler, Annihilus. Using the later´s cosmic control rod, he traveled back to Earth 2 years later. Having his life stolen from him, he became a villain and a member of the Masters of Evil ever since. 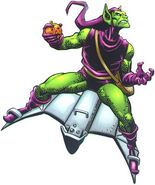 "I love you Peter. Always have, always will." - Gwen Stacy became the Green Goblin. During her mission to kill Norman Osborn she came into contact with the Goblin Formula, his suit and weaponry. After taking the formula once, she desired more and any sanity she had left was taken away. She took the mantle and became obsessed about finding both Spider-Man and Peter.
Add a photo to this gallery

Before Gwen Stacy´s death, it is revealed she was helping Dr. Connors with his experiments regarding reptile renegenation. They made several studies and discoveries, many of which were unknown to Connors himself and that Gwen kept in her notebook. After her death, he had access to it and realized his origins.

Dr. Curt Connors aka The Lizard, discovers after Stacy´s death using her notebook that he is an alien hydrib of a Skrull and a Human and that his mutation still has much to change, being delayed by his self experiments in the past. This discovery explains many details and as such he contacts the Skrull Empire. After his transformation is complete, Curt begins an affair with Veranke, the Skrull´s Queen.
Add a photo to this gallery 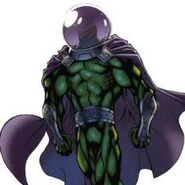 "This is no illusion, Spider-Man." - Hank Pym served as a founding member of the Avengers but turned to a life of crime when Iron Man accidentally killed his wife, the Wasp. He took the mantle of Mysterio and used his Pym Particles to fake magic and illusions even better than Beck himself did. His schemes and plans were foiled by Spider-Man multiple times, which caused him to join the Sinister Five.

"Before I had four metal arms, now I have an entire body." - Otto Octavius served as a long time foe for the original Spider-Man. However, the four metal arms he carried on his back began to alter his appearance even more, fusing with his human skin and turning his whole body into the same substance. He emerged as an enemy to the new Spider-Man and joined the Sinister Five to destroy him once more. 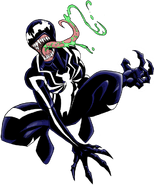 "And to think I was going to marry you." - Mary Jane Watson was one of Peter Parker´s greatest loves and remained one of his strongest supporters and allies. Gwen´s death made her a stronger and braver woman, which was in part why the Venom Symbiote, after the defeat of Eddie Brock chose her as his new host. Driven by hate and pure evil, she took the name Viper and joined the Sinister Five. 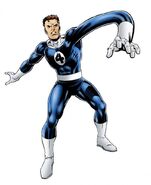 "Things have changed." - Reed Richards, also known as Mr. Fantastic was once the genius leader of the Fantastic Four. That changed when he discovered his wife´s betrayal with the young Spider-Man and left the team. He became even colder and more ambitious and worked as a scientist for AIM. He eventually felt the need for a revenge against Spider-Man. He joined the Sinister Five under the name "Vicious" to accomplish this goal and pursue his interests.

"Why can´t you understand? Power. It´s everything!" - Elizabeth Braddock was once the telepath Psylocke. That changed when she was captured by the Sentinels and her powers were removed. Alone and weak, she was saved by the Sinister Five, who granted her new powers in exchange for her services against Spider-Man. She took the name "Dagger" and was able to discover the hero´s identity, being offered a position in S.H.I.E.L.D. in exchange for her silence.
Add a photo to this gallery
The Sinister Five only included two members of the original Sinister Six. Kraven and the Vulture were among those who were "cured" by the new Spider-Man. Adrian gained a job at Oscorp and died of old age and Kraven returned to Africa where he became a feared hunter once again. Sandman moved to Jersey and Electro became an Agent of S.W.O.R.D. under probation. 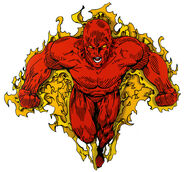 "Flame On" - Jonathan Storm, or better known as the Human Torch became the only original member of the Fantastic Four after Reed and Ben´s departure and Sue´s suicide. He reformed the team and currently leads them.

"I am the Vision of the Future" - The A.I known as Vision served as an Avenger and eventually married his teammate, the Scarlet Witch. In order to help Jonathan Storm reform the Fantastic Four, he and his wife agreed to join. 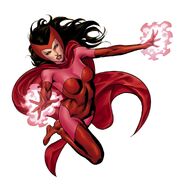 "Winds of Destiny... Change!" - Wanda Maximoff was the mutant daughter of Magneto and has been both a villain and a heroine, a terrorist and an avenger. She married the Vision and joined the team to protect Manhattan. 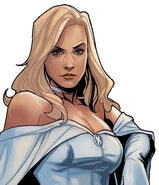 "Not even your flames can burn this Heart of Ice." - Emma Frost served as a villain and later as a member of the X-Men. She quit the team however when they regained their telepath, Professor Xavier. She was later invited to join the new Fantastic Four. 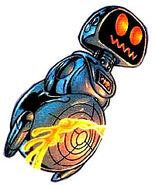 Herbie, Humanoid Experimental Robot B-Type Integrated Electronics, served as the Fantastic Four´s servant and ally. Even after Reed, Susan and Ben left the team, he continued loyal to Jonathan Storm, continuing with his duties to the new team.
Add a photo to this gallery
After Reed Richards, aka Mr. Fantastic discovered Sue´s betrayal with Spider-Man, he left the team and joined the Sinister Five. This proved traumatic to Sue who committed suicide days later. After this, Ben started becoming more distant until he eventually left the team to join the Heroes for Hire. The villains however continued to attack and Jonathan decided to regroup and reform the Fantastic Four in order to combat new and old threats.

Keep updated for more of Earth-3000. I hope you enjoyed. Feedback is encouraged.

Retrieved from "https://marvelcomicsfanon.fandom.com/wiki/User_blog:The_Ultimate_Thinker/What_if_Gwen_Stacy_was_alive%3F?oldid=106308"
Community content is available under CC-BY-SA unless otherwise noted.