Seven heroes from alternate worlds are chosen to join together as the Ultraverse Exiles to fight a mysterious foe that plan on destroying the Ultraverse.

Iron Man (James "Rhodey" Rhodes) (Earth-903912): Tony planned on the wedding with his and Pepper. So his asks Rhodey to be Iron Man again. Rhodey deicdes to become Iron Man again. After that, Rhodey was renewed that his was return to keep being as Iron Man as long Tony and Pepper are still married.

Moon Knight (Reed Richards) (Earth-448888851110): In this universe, Reed Richards was never Mr. Fantastic. Than, his meet the spirit of the legendary warrior of the moon, Moon Knight. His was chosen to continues the legacy. 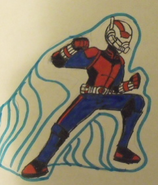 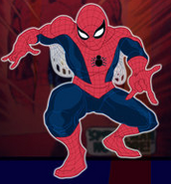 Spider-Man (Eugene "Flash" Thompson) (Earth-5513333330): In this universe, Flash Thompson is the first Spider-Man, instand of Peter Parker. His was bitten by a radioactive spider while on a trip field at OsCorp Industries. His used his powers to fight crimes and protect New York City from evil villains. After that, his was asks to join the Avengers which his join them to stop a alien invasion. However, Captain America saves his life from the Chitauri King which Spidey blame himself for not being more perfect. His left the Avengers and never rejoin. Than, his join the Ultraverse Exiles to fight against a mysterious foe. His was renewed by rejoining the Avengers and train more.

Nova (Samuel Alexander) (Earth-26666): In this universe, Sam is a adult who is a teacher at Midtown High. Until, later that night. Sam finds a helmet know as the Nova Helmet which turn him into Nova which his crimes both Earth and outer space. His was chosen to be parts of the Ultraverse Exiles. His was renewed to be recreated the Nova Corps which they was all destroy by the former Nova, Titus who just goes mad with powers and have almost taking over the universe.
Add a photo to this gallery
Retrieved from "https://marvelcomicsfanon.fandom.com/wiki/User_blog:Billy2009/Ultraverse_Exiles?oldid=106224"
Community content is available under CC-BY-SA unless otherwise noted.