Here is my own Avengers: Gods and Marvels.

Captain America: Scott Summers, a man who was in War World II, he was injected with a serum which turn him into the super soldier, Captain America. 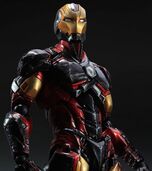 Iron Man: Charles Xavier, the CEO of Xavier Industries. He was kidnap by the Ten Rings which led by his old friend, Max Lehnsherr who have becomes the Mandarin. He escapes by creating a iron suit which works. Than, Charles created another suit and become the superhero, Iron Man.

Thor: Stephen Strange finds Mjolnir while on mountain and become the mighty Thor. 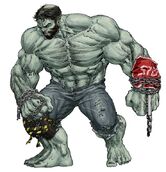 Hulk: Scientist Tony Stark was caught in an accident which turn him into a green bulk-like monster. Tony begins try to control the beast within.

Spider-Man: Hank Pym, the CEO of Pym Industries who was bitten by two radioactive spiders along with his wife, Janet van Pym and become Spider-Man.

Spider-Woman: Janet van Pym, the wife of Hank Pym who was bitten by an radioactive spider along with her husband, Hank Pym which she become Spider-Woman. 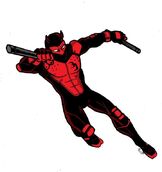 Daredevil: Peter Parker was blind when his was 5 year old and then, years later. Peter Parker used his powers to fight crimes as Hell's Kitchen's guardian angel, Daredevil. He is also a Defenders and Heroes for Hire member.

Wolverine: Steven Rogers was the first mutant to be in this universe. When his was 6 year old, he gains claws and runaway and years later, he was taken and gets most of his memories erased by an mad scientist which works by Hydra. Than, his begins to remember some of his pests. His vow vengeance on Hydra for erasing his memories. He is also a X-Men member.

Ms. Marvel: Anna Maria was a SHIELD agent who gained Kree powers while investigating an strange alien pod.
Add a photo to this gallery

Vision: He is the reason why the Avengers came together. He is an evil robotic alien who plans on destroying all of humanity and began his machine empire. He was defeated and destroyed by the Avengers, and Wolverine used 14 bombs to blow up Vision's factory.
Add a photo to this gallery
Retrieved from "https://marvelcomicsfanon.fandom.com/wiki/User_blog:Billy2009/My_Own_Avengers:_Gods_and_Marvels!?oldid=196246"
Community content is available under CC-BY-SA unless otherwise noted.