Earth-1616190 is a remake of the Marvel Universes. Its set after the finale of 2015 Marvel Secrets Wars.

Captain America: During WWII, army soldier Steven Rogers who puts of the Super Soldier Project which works. He becomes the super soldier, Captain America. However while during the finale battle with Hydra. Steven try to shut down the rocket which his was frozen in ices. Than years later, his was found by two scientists. Than, his goes to New York City to protect there.

Iron Man: Billionaire playboy Tony Stark was taken by the torroriest group, the Ten Rings. Than, his and Ho Yinsen created a iron suit which works. However, Yinsen dies and Tony left. Than his was found by his best friend, Lt. James "Rhodey" Rhodes which his tell that his was taken by the Ten Rings which led by the mysterious Mandarin and also tell him about the iron suit his and Yinsen made. Tony created Mark II for a flight test which sorta test. Than, the Mandarin which reveal to be Gene Khan, Tony's childhood friend. Tony created the Mark III to battles the Mandarin. Than, while the Avengers are formed and defeated a group of alien warriors know as the Chitauris. Tony still using the Mark IV armor. 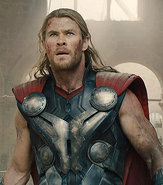 Spider-Man: Average teenage Peter Parker was bitten by a radioactive spider while during a field trip at OsCorp Industries. His have amazing spider-like powers and become the superhero, the amazing Spider-Man after the death of his beloved uncle Ben Parker which his learn that With great powers there must also come with great responsibility which his will never forget.

Scarlet Witch
Add a photo to this gallery

Retrieved from "https://marvelcomicsfanon.fandom.com/wiki/User_blog:Billy2009/Marvel%27s_New_52_(Earth-1616190)?oldid=121014"
Community content is available under CC-BY-SA unless otherwise noted.