Hey guys! I'm working on the Visionary Animated Universe], and its time to vote on some costumes.

Hank Pym will be one of the first heroes to make his debut. He's alreday been annoucned as the leader of the Avengers as Atlas.... but first he'll appear as the Ant! But what outfit should he be sporting? 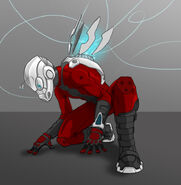 Option C
Add a photo to this gallery

More heroes and their options will eventually debut.

Retrieved from "https://marvelcomicsfanon.fandom.com/wiki/User_blog:BeholdtheVision/Visionary_Animated_Universe-_I_Want_You!?oldid=89761"
Community content is available under CC-BY-SA unless otherwise noted.