For your convience- ANAD Marvel Point One! 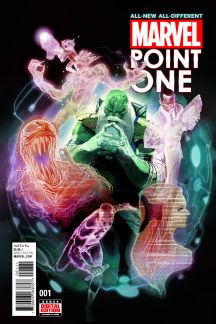 This is one of the first three anthologies I will be reviewing, featuring short preludes for Agents of SHIELD, Contest of Champions, Carnage, Daredevil, Rocket Raccoon & Groot and All-New Inhumans.  As such, there were strong stories, and there were weak stories, and they all pretty much stood on their own and will be rated separately. Well, here goes!

First up, we've got the framing story, Contest of Champions, which follows the Maestro in his attempts to choose a team of z-listers. Writer Al Ewing does the very best he can with the constraints that come with having to introduce and connect to all the other stories. What happens is an overall forgettable story, boosted by strong character work from Ewing and some very appealing art by Paco Medina. Medina's art gives the Battlerealm an air of both fun and darkness, with his bright and distinctive characters popping against the grim and regal backdrop.  (6/10)

Next is a brief story introducing Carnage, a series that is to follow an FBI team of John Jameson, Eddie Brock, and more trying to track down the killer. This premise sounds, quite frankly, amazing, but the story here fails to live up to that. We get two scenes of havoc and murder from the ever-loving Cletus Kassady, which shine in regards to visuals, but falter in terms of story. Its hard to root for or against a guy who kills a few people, without really establishing any sort of attachment or foreboding around the victims or the deed. The grim and gritty art of Mike Perkins does a lot to enhance the feeling of the book, but can occasionally make it hard to actually fear Carnage to due how disconnected one feels from the sterotypically dark and dank enviornment. We get a brief look at one or two of the members of the FBI team, but not really enough to give us an idea of what they will be like as characters. (5/10)

For Rocket Raccoon & Groot, Skottie Young and Felipe Andrade whip up a brief tale of pure fun about Rocket and Groot trailing some sort of alien on Halloween night. I will say that I have never been huge fans of either of those characters, but this was a strong outing in regard to characterization. There really isn't much to say about this one- it was fun, but the art didn't quite line up with it, coming off as grittier and moodier than the story wanted to be. Also, Rocket looked tall, which is never cool. (7/10)

Agents of SHIELD by Marc Guggenheim does an admirable job of juggling about 5-9 cast members and giving them all a chance to shine. Though I love the Agents of SHIELD television show, their last attempt at a comic was far from succesful, suffering from an emphasis on guest stars over the team itself. This new series looks to address all these problems, with a strong character dynamic and solid if not stunning art from German Peralta.  Though some of the one-liners were groan-worthy and the reveal of yet another SHIELD 'traitor', questionable, this looks to be an undervalued gem in the new Marvel Universe. (8/10)

Second to last, we have what is probably the strongest story of the bunch: All-New Inhumans by Charles Soule and Stefano Caselli. While only one of the books characters, Crystal, appears, this story does a phenomenal job of making me ecstatic to pick up the ongoing in December.  Crystal has never been a particularly strong character, having been perputually defined by the three men in her life (Ronan, Quicksilver, and the Human Torch) but she comes off as incredibly nuanced and interesting, not to mention kickass, in this promo. The art is some of the best in the industry, and Soule had me caring about every single one of his layered characters. This story was strong but heartbreaking. (10/10)

The final story, Charles Soule and Ron Garney's Daredevil, was another mixed bag for me. On one hand, he does a great job of introducing new character Samuel Chung, aka Blindspot. A genius chinese-american illegal immigrant, his struggles are poignant and intriguing. The deal is sealed with moody but invigorating art from Garney, which really helps up the hopeless mood of Hells' Kitchen- shades of grey and black offset by the bright red of Daredevil. And therein lies the problem itself- there really wasn't much Daredevil in this. Which was okay, but not really what I was hoping for. Overall, a great read. (9/10)

Retrieved from "https://marvelcomicsfanon.fandom.com/wiki/User_blog:BeholdtheVision/All-New_All-Different_Marvel_Weeks_1-2_Reviews?oldid=124819"
Community content is available under CC-BY-SA unless otherwise noted.