Well, we should have all known this day was coming. Once I finally release the second part of Annual #2, the series will officially be over.

I know, it's a sad thing to end the series, but I have a few reasons behind it.

Anyways, those are really the further ideas I would have gone with. I think I need a break from Emerald, really. I will certainly still draw, and no doubt I'll get to writing that actual Emerald comic.

A final few words I wanted to give to the Emerald storyline. Gosh I loved writing this series. I really appreciated the feedback everyone has given me, and overall, I feel like I owe the community something for how friendly it's been. Sure I've had a few falling outs, but life goes on. We amend friendships. We become better people. I know since I started working on this series I've certainly changed, with idealogies and even personality.

I especially appreciate the criticism I've been given by everyone. Even if I have been given harsh criticism, it was certainly helpful. Gosh, it's hard to think of when I was younger I was so against criticism, and now, being 17 years old, I absolutely love it.

I'd like to give a special thanks to a few users on this wiki.

And last but certainly not least...

I am Emerald Man. James Barmms is me. Not my real name or what I really look like. But his feelings for others? I wrote some of myself into him, and then some extra traits.

Please, enjoy the last issue of Emerald. I put my heart into it. 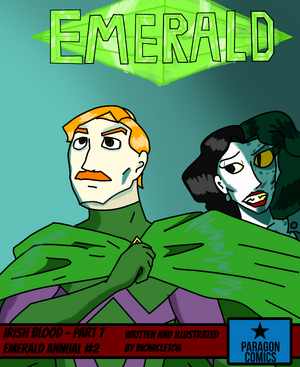 --Not Jack Kirby I draw so much for you guys.

Retrieved from "https://marvelcomicsfanon.fandom.com/wiki/User_blog:BIONICLEToa/The_End:_Emerald%27s_official_ending_and_a_word?oldid=167972"
Community content is available under CC-BY-SA unless otherwise noted.