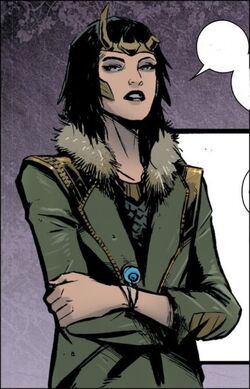 Milene was born in New York City, United States. She was born with the same magic as her mother to detect lies. Though her mother called it blessing, she considered it a curse.

When Milene was about to make her thirteen-year-old, she witnessed a magical beast attack, watching Doctor Stranger stop him. She ended up using magic unconsciously to defend herself from the attack of a demon who had escaped from the supreme sorcerer, which caught his attention. He then took her to the Sanctum Sanctorum, to teach her to use the mystical arts.

Although he did not initially know of his origins, Stephen eventually discovered who his father was, but upon learning that they had no connection he eventually ignored that fact. He then coached her along with a few more students in order to choose one of them to succeed him.

Knowing that her master had somehow acquired magic through Yggdrasil, she decided that she should try to do the same. She learned a spell to transport herself interdimensionally to Asgard. However, before the tree could reach, she was barred by Thrud Thorsdottir, the daughter of King Thor of Asgard. She was brought to trial in Asgard, but Stephen appeared before she was punished, revealing the truth about her father. She was then accepted as princess of the kingdom, finding herself to be cousin of Thrud.

She then decided that she should find out more about her origins. She temporarily left Stephen to train magic in Asgard. She learned some tricks her father used to use, like illusions and transformations. She also trained briefly in close combat. At that time she developed a friendship with Thrud.

The origin of Milene's magical powers comes from three main sources: the magic that all humans have the potential to unlock, the Asgardian magic inherited from their father and the magic of truth inherited from their mother. However, it apparently can also access other sources, such as using interdimensional spell sources.