Start a Wiki
1 2 3
Hey there , Please, do not TOUCH this, as this is where I work on drafts of fanon articles. 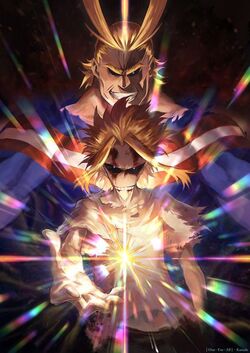 Hope may be a flame, and it may go out one day from the frost cold of despair ... but you forget something Thanos. First, the embers of a flame shall ignite the flames of another, giving hope to all. Even if mine goes out, it will exist forever in humanity. So let me show you, the last of my LIGHT!﻿

Uranometria was born in America where he would be a hero fanatic. Growing up during childhood was tough for him due to his hypotonia, which is a "medical disorder" of low muscle tone on the body. Due to this, throughout his school life, he was often bullied for he looked mostly like a skeleton. While he was bullied and hated it, he did not let that hatred to go at others who were cared and generous to him.

By the time he reached 18 years old and left, he tried to find work in order to live so he may leave his parents house. However, as he was returning home, he noticed the door was smashed in. In fear, he'd quickly ran back in to find the villain in his house, who had killed his parents. Before he could even react, the killer had struck him into his stomach with his right foot, throwing him outside. Coughing, Uranometria stood up and attempted to fight the villain. Despite the physical odds in skill and power, no matter how many times he dropped, he still stood up. He believed a true hero is someone who does not give up, and would also help those in need regardless. However, for the finale time, the villain had broken his two legs immobilizing him. Unable to retreat, he prepared for his demise, only to see a girl struck at him. A girl, a heroine stopped the villain, but before anything else, he soon passed out.

One Above All: A sacred transferable mutant power that had said to been passed down generation to generation, hero to hero. One Above All was said to be the testament legends of old, from Achelles invinvibility to Herackles great immense strength. Given to Uranometria by his mentor, Scheherazade after she saw potential a hero in him, gave him One Above All and trained him to become a hero. After Captain America's death by the hands of the unidentified villain who had also killed Scheherazade, Uranometria then introduced himself into the world by saving a entire city after a metorite smashed into it. Using One Above All, he became a hero of peace and justice, a being that everyone admires and feels safe around. Eventually, he became the new Captain America.

Retrieved from "https://marvelcomicsfanon.fandom.com/wiki/User:CaptainFlowerss/Sandbox2?oldid=256051"
Community content is available under CC-BY-SA unless otherwise noted.