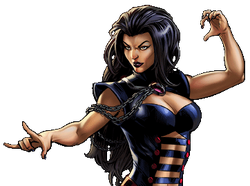 Earth-1010
Base Of Operations
The Dark Dimension
Characteristics
Gender

Umar was spawned along with her brother by Sinifer, a Faltine. The Faltine are beings of pure magical energy that exist in their own universe. It's implied that normally when Faltine spawn, that the new beings are exact copies of the previous, but in this instance, the spawn were different. Unlike Sinifer, they craved physical matter. When Sinifer tried to stop them, they transmuted him from energy into matter, essentially killing him. This angered the rest of the Saltine, and so Dormammu and Umar were exiled from the dimension of the Faltine.

The two fugitive Faltine then entered a universe known as the Dark Dimension, which was inhabited by sorcerers known as the Mhuruuks. Their ruler Olnar dreamed of returning to the days of warfare and conquest. Umar and Dormammu befriended Olnar and played upon these desires. They showed Olnar how to make conquest of other dimensions and bond them with his own. Olnar greedily subjugated several dimensions and added them to his own domain. In time, the rogue Faltines led Olnar to shatter the barrier between his dimension and that of the Mindless Ones. The Mindless Ones were a horde of soulless brutes that exist simply to destroy anything that lies in their path. The Mhuruuks were beaten back by the onslaught and many were slain, including Olnar. Dormammu and Umar then slew or exiled any wizards that might oppose them. Then they barred the Mindless Ones behind a great mystical barrier.

This battle weakened Umar, and she became subordinate to her brother. Dormammu ascended the throne as regent and ruler of the Dark Dimension. He reassumed his Faltinian form of flame, but Umar chose to remain in her human form.

One of the Mhuruuks who was not slain was Orini, son of Olnar, being just an untrained boy. In time he aged, while the Faltinians remained the same. Eventually Orini became the chief disciple of Dormammu. In time Umar noticed the adult Orini, and trysted with him. Both evidently were virgins, and Umar was initially disgusted with the experience and with Orini himself (she later became a skilled seductress, but her disdain for Orini remained unchanged). In six cycles of the Dark Dimension, Umar gave birth to Clea. This experience changed Umar, and she now was no longer able to return to her Faltinian form.

Her inability to transform angered Umar, and in her frustration she lashed out at Dormammu. Now far stronger than Umar, Dormammu banished her to one of the subjugated pocket dimensions of the Dark Dimension.

As ruler of the Dark Dimension, Umar's head was surrounded by a plume of mystic fire, the flames of regency.

Retrieved from "https://marvelcomicsfanon.fandom.com/wiki/Umar_(Earth-1010)?oldid=187949"
Community content is available under CC-BY-SA unless otherwise noted.