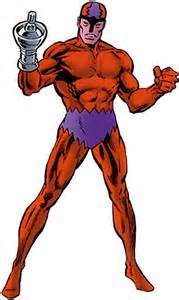 Single
Occupation
Criminal; formerly scientist
Origin
Origin
Klaw was physically converted into sound by a weapon of his own design.
Place of Birth
Vlaardingen, Netherlands
Creators

Little is known about Klaw's life before his incarceration in the Vault. It can be assumed to be similar to his mainstream counterpart.

Klaw was among the supervillains imprisoned in the Vault. He was freed when the War Machine Skrull attacked said prison, and attempted to break out along with fellow inmates Whirlwind, the Iron Cross, Crossbones, and Grim Reaper. During the debacle, he managed to incapacitate the Winter Soldier.

Retrieved from "https://marvelcomicsfanon.fandom.com/wiki/Ulysses_Klaw_(Earth-6109.2)?oldid=128952"
Community content is available under CC-BY-SA unless otherwise noted.