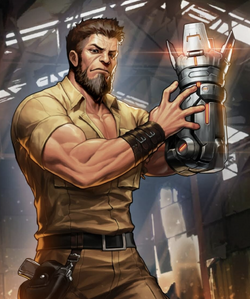 This Sonic Emitter is good for many things. Not only can it kill with the slightest blast, I can stream my mixtape directly into my brain.

Ulysses Klaw is a black market arms dealer known for pulling off dangerous jobs. One such job was sneaking into Wakanda to steal a small mound of Vibranium. He used the Vibranium to develop a sonic emitter to replace the hand he lost in the process.

However, his sales of Vibranium in New York City caught the attention of the Fantastic Four, who allied themselves with the Black Panther to take him down. While Klaw’s operation was dismantled, he was able to escape.

He would go on to form an alliance with the Wizard, and join him in brainwashing the Inhuman Queen Medusa. With her under their sway, they then recruited the former AIM drone Whirlwind to form the Frightful Four.

However, their group proved to be no match for the Fantastic Four. They were taken down, but Klaw managed to escape once more. He abandoned the United States and went on to form an alliance with the Wakandan outcast Killmonger. Unfortunately, the alliance did not work out in his favor, as Killmonger murdered him and used his body as a token to enter Wakanda.

Retrieved from "https://marvelcomicsfanon.fandom.com/wiki/Ulysses_Klaw_(Earth-101)?oldid=250761"
Community content is available under CC-BY-SA unless otherwise noted.