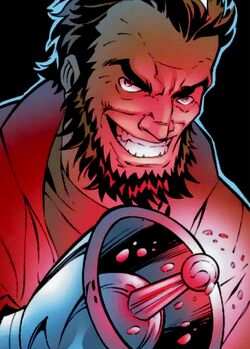 Ulysses Klaw, Captain Ahab, The Dealer, The Murderer of King T'Chaka, An Arms Dealer Strapped to a Chair, The One-Armed Maniac, The Notorious Vibranium Thief
Identity

Brown
Unusual Features
Severed right forearm, tattoos across the back of his torso
Status
Citizenship

Come here and meet your doom, your highness... Just like how your father met his...

Ulysses S. Klaue was the son of former Nazi war criminal, Colonel Firtz Klaue. After World War II, he moved back to Belgium and later anglicized his name to "Klaw," and raised his son with tales of Wakanda. However, Klaue started having a unforgettable, enraging tension against Wakanda, as his great-grandfather was unfortunately killed by the Black Panther in the 19th century, followed by his own father presumably killed in action after leading an assault on Wakanda. In the act of truly honoring both his great-grandfather and father, Klaue then began his criminal activities by operating as an arms dealer and assassin-for-hire primarily in South Africa.

Due to his actions starting to spread and grow across the secret outlaw community, he eventually gained an essential position within the discreet criminal underworld, working as an enforcer, for the infamous criminal organization known as the Intelligencia. Most of the time during his missions, his most notable accomplishments were for being a frequent assassin-for-hire, primarily in South Africa. Klaue was also revealed to be a scientific genius in a specific field, since he physicist and engineer specializing in the field of sonics. This talented advantage of gave him the ability his create all new powerful weaponry out of his own designs, using classified technology all over the world, including the "rare" source of Vibranium technology in the kingdom of Wakanda, which were often salvaged by him and his crew whenever they got the chance.

The Assassination of T'Chaka

Some point during his flourishing career living as a notorious and successful black market arms dealer & mercenary, Klaue was paid ten million dollars by an anonymous sponsor to assassinate Wakandan King T'Chaka at the Bilderberg Conference in the Netherlands when he refused to negotiate about Wakanda's resources. Seeing this as a "once in a lifetime" opportunity in his revenge against T'Chaka and obtain all the element Vibranium from the heart of Wakanda, Klaue instantly made up his mind and accepted the mysterious customer's offer straightaway. Klaw and his fellow mercenaries opened fire towards the technologically-advanced defenses of Wakanda. Witnessing his father got assassinated by Klaue who created a vibranium sound-based weapon, and tried using it to kill the king and destroy Wakanda, once the latter has been completed and the assassination of T'Chaka was a success.

T'Chaka even had the chance to defeat and finally apprehend Klaue in their duel, but the latter escalated quickly, ending with T'Chaka being fatally injured by the mercenary, who deeply struck him through the king's sternum with a vibranium shrapnel, causing T'Chaka to lose his own life at the cost of saving his own son, T'Challa. Enraged by the assassination of the noble king, Klaw was disarmed by Wakandan warrior and shaman Zuri, who pierced Ulysses' right arm with a spear, and the orphan prince used Klaw's own sonic blaster to shatter his right hand, prompting him to call his troops to retreat. Due to his father being assassinated at the hands of Klaw, T'Challa eventually replaced his father as the king of the Kingdom of Wakanda, and took mantle of the role of protector of his tribe, the Black Panther to honor his father’s memory and avenge his death by later hunting Klaue and serve him justice, or even merciless vengeance through a death sentence, if seemingly necessary.

Search for the Ultimate Nullifier

A few years later, Klaw returned into his life of crime once again, though he suddenly went being mostly independent left for reasons unknown, and hooked up his new sound converter machine to the vibranium as the replacement to his amputated right forearm. This machine was able to create solid creatures from sound, and he used them to battle the Fantastic Four in his first lone wolf mission in obtaining their recently-forged weapon, Ultimate Nullifier, a weapon more powerful than any weapon on the planet that they've only recently used in preventing Galactus' attack and attempted invasion on the planet. During the battle inside the Baxter Building, Klaue was able to charge at each of all the Fantastic Four one by one in each different ways, thanks to his powerful mobile weapon, leading to his accomplishment in opening the containment unit for the Ultimate Nullifier.

However, just at the very moment when Klaue was the final victor in his attack against the four inside the Baxter Building and his quest of the Nullifier finally being completed, came the miraculous arrival of T'Challa, who now introduces himself to his enemy as the Black Panther, coming to help the heroic four as he was able to receive their messages regarding the ominous assault of Klaw. In the end of their brutal and lengthy duel, the Panther defeated Klaw, and was later pummeled into unconsciousness by Invisible Woman, wearing Shuri's newly-crafted Vibranium knuckle guards, which delivered a powerful blow to the villain, and was subsequently taken to prison.

In the wake of Erik Killmonger's defeat in an attempt on dethroning the King of Wakanda himself, the international terrorist started to commence his back-up plan against T'Challa and his Royal Family, which was using and exploiting all of Wakanda's deepest, darkest secrets throughout the rest of the entire world against them, specifically every other governments all around the world, with the help of his new situational allies, Klaue and a few high-ranking members of the Intelligencia, who were also coincidentally some of Black Panther's mortal archenemies.

When these two foes conspire to destroy Wakanda once again, the Black Panther must team up with Everett Ross, the Dora Milaje, and now, with the special help of his newly-found allies, the X-Men, the Fantastic Four, to prevent him and Wakanda from being the public enemy of the rest of the entire world, including some of his own allies from turning against him, before its too late. In the aftermath of, Killmonger was defeated for the second time and was apparently killed after detonating the Wakandan city of Necropolis, in an attempt of sealing and burying the only pathway beneath the Great Mound, the nation and the entire world's only known natural source of Vibranium, albeit it was proven wrong later on. Klaue and the Intelligencia was later shown to have barely survived their attempt to wreak havoc on the borders of Wakanda, with Klaue losing his prosthetic cannon arm at the hands of the X-Man Wolverine, only by the sheer strength of the mutant himself, not by his Adamantium claws, a metallic element whose durability was even proven to rival Vibranium's.

Shortly after the delusional android Ultron's first duel with the heroic Avengers, he immediately traveled to the coasts of Africa, specifically the cornered borders Wakanda, in order to obtain supply of Vibranium from Klaue himself, who has now rebuilt his new upgraded version of his prosthetic arm, which Ultron intends to use to create a new body. The current king of Wakanda, T'Challa donned his Black Panther attire after hearing the message of Ultron's arrival and assault on his kingdom and went into the scene to prevent the making situation from ever worsening that would cause more destruction in the kingdom of Wakanda.

He and his kingdom's forces decided to charge and defend the kingdom from Ultron's assault and his sentries. The Panther even successfully apprehended his long-time archenemy Klaw once again (though he manages to escape by the latter) and afterwards, he confronted and tries to fight the megalomaniacal machine until his forces was eventually outmatched and was close to being killed right until the Avengers have arrived, and helped Black Panther retreat and leave Wakanda with the stolen vibranium, as they chase the android and prevent him from transferring himself into his new form.

Retrieved from "https://marvelcomicsfanon.fandom.com/wiki/Ulysses_Klaue_(Earth-61615)?oldid=224436"
Community content is available under CC-BY-SA unless otherwise noted.