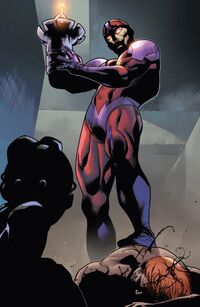 In 2002, due to unknown reasons Klaue murdered the King of Wakanda; T'Chaka Udaka; the Black Panther.

At an unknown point, Klaue would experiment on himself and mutate into literal living sound.

In late 2014, he allied himself with Juggernaut, Radioactive ManBlack Knight and Batroc the Leaper to steal Vibranium from Wakanda. Although he and his allies were defeated by T'Chaka's son, T'Challa; the new Black Panther and the X-Men.

Solid Sound Body: Klaw possesses a number of superhuman physical powers stemming from his body's conversion into an extra-physical energy form. In some as yet unknown way, Klaw's body is a stable energy form possessing mass and sentience. This form is not bound by conventional human limitations: Klaw does not need food or sleep, nor can he be harmed by penetration wounds, disease, shock of impact, oxygen deprivation, etc. Klaw's body can in fact be vivisected into many pieces without killing him and these pieces can be fused back together by simply touching them to one another. He can only exist in a medium that allows the propagation of sound waves: he would dissipate in a vacuum. Since his body is quasi-solid, he can be touched by physical objects. Although it would cause no permanent damage, a sufficiently powerful blow may not only stagger him but cause temporary unconsciousness. (This occurs when the impact creates a counter frequency that is disharmonious to that of his body). Klaw can maintain his "sonic state" indefinitely. He cannot transform back into his original organic state. His form is resistant, if not immune, to telepathy.

Sound Generation: Klaw can bodily transform ambient sound for a variety of uses through his prosthetic sound converter. He can' project waves of intense, high-volume sound (maximum loudness: 170 decibels), capable of deafening anyone within a .6 mile radius. He can convert sound into controlled blasts of concussive force with a maximum force equivalent to 3,000 pounds of TNT. He can also create 3-dimensional, mobile sound/mass constructs possessing such complex forms as those of animals. He shapes and animates these constructs by mental command and they only remain in existence for as long as he wills them. Not possessed of the sentient life force that his own sonic form is, the constructs are not nearly as invulnerable. The constructs also can be used to fuse with a human body and be able to survive for a longer period of time and command other sound constructs, though it also causes the host's body to also deteriorate when they do

Vibranium: Klaw's major vulnerability is his susceptibility to Vibranium. Because Vibranium absorbs all forms of energy including sound, the nearness of a certain quantity of Vibranium can cause the mass of his energy form to become unstable and collapse. Usually when this occurs Klaw's body is absorbed by his own prosthetic sound converter.

Retrieved from "https://marvelcomicsfanon.fandom.com/wiki/Ulysses_Klaue_(Earth-1111)?oldid=176824"
Community content is available under CC-BY-SA unless otherwise noted.