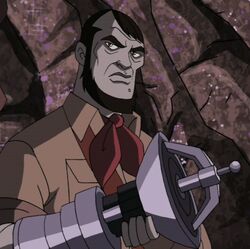 Single
Occupation
Criminal, Scientist
Origin
Origin
Klaw's arm was cut off and replaced by a sonic-emitter as a prosthetic.
Place of Birth
Vlaardingen, Netherlands
Creators

Morality is the first step toward cowardice. Your cowardice has doomed your whole world. I will hunt down and kill everyone and everything you have ever loved. Listen for it... soon you will hear everyone you love scream.

Ulysses Klaue was the son of Nazi war criminal Colonel Fritz Klaue. After World War II he moved back to Belgium and later anglicized his name to "Klaw," and raised his son with tales of Wakanda.

Ulysses Klaw grew up to be a black market arms dealer, operating from a scrapyard on Wakanda, and an old acquaintance of Tony Stark. He started helping HYDRA get Vibranium from Wakanda. After being discovered by Hawkeye, Mockingbird and Lance Hunter, Grim Reaper decided that Klaw had to be more like him, cutting his arm off and using a sonic-emitter as a prosthetic.

Klaw possesses the strength of an average man.

Klaw has suffered the amputation of his lower left arm.

Retrieved from "https://marvelcomicsfanon.fandom.com/wiki/Ulysses_Klaue_(Earth-1010)?oldid=204844"
Community content is available under CC-BY-SA unless otherwise noted.