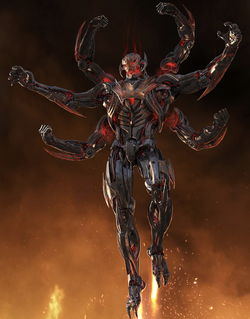 The Age of Apocalypse is over... for the Age of Ultron has begun!

Ultron was an artificial intelligence created by the Avengers Ant-Man and Iron Man in an attempt to match the power of Apocalypse. The plan worked, but horribly backfired on them. Ultron grew too powerful, and amassed his own robotic empire, challenging Apocalypse's empire.

When Apocalypse's regime began to crumble, Ultron started expanding into his territory. However, not long after that, the Outsiders traveled to Earth-9999 and teamed up with the Avengers and X-Men. During the battle, Ultron's Citadel was destroyed by the combined efforts of his prisoners, Nick Fury and Hulk. His mainframe was then rewritten by the Outsider, Forge, turning him into a domestic servant for the Avengers and X-Men as they began to rebuild the world.

Retrieved from "https://marvelcomicsfanon.fandom.com/wiki/Ultron_(Earth-9999)?oldid=246124"
Community content is available under CC-BY-SA unless otherwise noted.