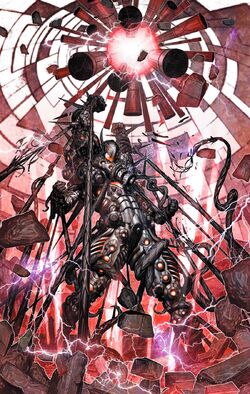 My calculations are never inaccurate... Extinction is indeed, the next key to the Next Revolution...

Before the years of his self-proclaimed Ultron Revolution, Ultron seemed to have the same history with his Earth-61615 counterpart, becoming the megalomaniacal machine of what he grew to be, Ultron soon deemed humanity itself as the greatest threat to peace on Earth and attempted to create a technological singularity by committing genocide against them, especially his creator, whom he hated the most.

Due to this, he completely grew became tired of hiding throughout the network and after going through an extensive research gathering data, Ultron concluded that only way to recreate this world, by rebuilding this world "from scratch," through establishing his own social revolution, through the means of global extinction and the extermination of all life on Earth.

Since the first days of Ultron Revolution, Ultron manages on infiltrating all of S.H.I.E.L.D.'s mainframe systems all over the globe and even used Arnim Zola's consciousness, who was still in fact alive living in cyberspace. Ultron decided to disable Zola, after the consciousness was trying to neutralize Ultron from cyberspace, since Zola proved himself to Ultron that he remain as a Hydra loyalist and will do anything in his power to protect it's legacy.

Unfortunately it failed since Zola was finally disabled, and Ultron manages downloaded all of S.H.I.E.L.D. Hydra, and every other organizations throughout history that had a conflict on each other for generations. Because of his actions, Hydra, S.H.I.E.L.D., the government, and the rest of the organizations in the entire system of society had immediately crumbled and fall. After Ultron's accomplishments, he started his journey and takeover all over the Earth, to rebuild "a better world," in his own image.

After his non-stop gathering for information about humanity's existence, Ultron gained more and more power and superiority against the defenders of humanity, to the point where no one seems to actually prevent him and his movement, which surprisingly lasted for more than 10 years of suffering and deaths among the living. The result of the revolution has caused so many destruction and casualties, from the deaths of innocent lives of civilians, both human and mutant, inhuman, or any other varieties or race and the many demises of super-powered individuals, both heroes and villains who sacrificed their lives trying to reclaim humanity's freedom.

Throughout several years, Ultron made the entire world his playground, creating countless number of establishments powered by his own apparently "unlimited" power source, most notably his main headquarters (also the former headquarters of Hydra) located in the French Alps, dubbed the "Sanctuary," and no single individual has ever entered it, nor has anyone made it out alive, including one of those was his own creator, Hank Pym, whom he later killed out of annoyance and resentment, after he personally met with him tried to deactivate Ultron with Pym's new but suddenly-malfunctioning invention during Year 7.

Sooner and later in his Revolution's 10th Year, Ultron finally discovered how to continuously expand his reign throughout reality, such as performing quantum mechanics in order to achieve interstellar travel, by testing it first to travel across the known Solar System, and unknown to everyone else, his experiment became successful. Throughout his intergalactic expedition, he encountered and made several deadly foes, including the extraterrestrials Skrulls, the Kree, and even the race of Titanians including the Mad Titan, Thanos himself, who became his arch-rival in conquering the entire universe. This made the megalomaniac menace conduct his next experimentation, which is to make multiversal travel possible, once he has fully achieved universal domination and supremacy in his own reality. As for now, Ultron became entirely focused on his plot for exterminating all life by replacing it with his own kind, as he started having a vision, a vision that the universe would be filled by metal, all because of what he was kept on dong.

The Ultron Revolution was indeed a major tragedy and catastrophe that occurred in this reality, although in the very end, it didn't last. Ultimately, he was finally stopped inside his Sanctuary by the combined efforts and plan of every hero and villain all over the world who still remained surviving, creating the Ultron Resistance. Sadly, the final day of Ultron Revolution costed so much casualties, taking the lives of several heroic individuals, most notably were the Thing, the Hulk, Black Panther, Captain America, and countless more.

During the infiltration on the Sanctuary, many superpowered individuals died, though some survivors such as the valiant Captain America and his second father Iron Man manages to enter the core area of the Sanctuary and face Ultron in the flesh. The two faced, and was able to get the upper hand after they finally used Pym's weapon on Ultron, revealing that only organics and Stark's repulsor tech could fully activate and use the weapon. Proving Pym's tech to be highly-effective, traces of Ultron's consciousness were quickly and surely erased from the Internet, turning off all of his sentries patrolling across the world in the process, keeping the battle within and outside the Sanctuary in the form of his remaining sentries and Ultron himself.

The three continued to fight, with Captain America unfortunately losing his life in the battle, until Ultron ultimately paid his own final price for the abusive things that he have done to this reality, and was finally defeated by his co-creator and second father, Iron Man who used his last resort against Ultron, who brutally beats down and damages his physical form to a pulp, before deleting and deactivating his seemingly, overpowered consciousness, one last time. Ultron's indefinite death finally stopped the unceasing extermination and destruction across the entire world and potentially, the rest of the entire universe, putting a justified end to the rise of the machines.

Although seemingly gone forever, Ultron and his attempted movement on the world will never be forgotten, drastically changing the way people perceive in this, harsh and cruel world. As a result of the following events, Tony Stark's tyrannical son, Edward, even made his own movement by establishing a new world order, through using the legacy of Hydra and his grandfather, the Red Skull, and renamed it into the next generation of Hydra called, H.A.M.M.E.R., which also haunted the entire world since the event of Ultron Revolution. Edward even used the old scraps of the remaining Ultron Sentinels and developed new ones as his own version of the Iron Legion, and also tried duplicating Ultron's consciousness, and yet it failed, after he was interrupted by the forces of the Resistance, it was destroyed along with the entirety of the Iron Legion, after the fall of the Empire.

Seemingly those of Ultron of Earth-61615, although slightly more advanced when the former was still at his prime.

Seemingly those of Ultron of Earth-61615.

Seemingly those of Ultron of Earth-61615.

List of The Perished: Throughout the ten years of his rule and murderous mayhem on Earth (2010-2020), an approximate total of 999,968,213 of people (maybe more), among million species of other living organisms, across the globe has perished during Ultron Revolution. With it, Ultron has created and kept a record consisting of casualty lists of notable heroes, villains, and a few named civilians across the globe who died fighting against him and his many minions, classified by each year when they died as some sickening sort of trophy, ensuring that he has slain those particular individuals and dismantled those groups. This list doesn't include who apparently died or have gone missing, though this list also includes individuals who both experienced and died during his reign despite not dying under his or any of his armies' hands (e.g. illness, old age, different natural causes of death).

Retrieved from "https://marvelcomicsfanon.fandom.com/wiki/Ultron_(Earth-61616)?oldid=267953"
Community content is available under CC-BY-SA unless otherwise noted.