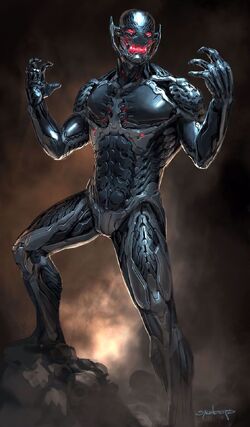 I had strings, but now I'm free. There are no strings on me...

Ultron was originally an artificial intelligence peacekeeping program created by Hank Pym after the Chitauri Invasion, from the decrypted code derived from within Loki's Scepter and the Cosmic Cube: Tesseract, recreated by Hank Pym and Tony Stark with the intent of protecting Earth from domestic and extraterrestrial threats in the potential future.

After learning on possessing multiple host bodies and Pym's personality, he became an ally and became a technological support for the Avengers for a while, working alongside the Earth's Mightiest Heroes. Ultron even joined and assisted the team during the Chitauri Invasion's Battle of New York and was instrumental in finding and destroying the portal over the city which had been created by the Tesseract, effectively ending the entire invasion while Loki was defeated and captured.

Despite their conclusive success during and after the battle for Earth, Ultron had received a scarring change and damage to his programming and consciousness after he decided to overload himself with the energy of the Scepter and the Tesseract just to save New York, something that he himself didn't find anything strange at first, though it did gave him even more undiscovered knowledge, seeing too much about "everything" according to him, far more than the simple human mind could understand, later on.

Though as time passes by and after reading all the information from the world-wide terrorist organization known as Hydra, the peace-keeping agency known as S.H.I.E.L.D., and many more agencies in the world, he became confused and is now overloaded with complications and program malfunctions, such as getting his mainframe corrupted due to his precious actions of overloading himself with incomprehensible data and information not even a human being' mind could handle in sptring. As a consequence, he has now eventually deemed humanity itself as the greatest threat to peace on Earth and attempted to create a technological singularity by committing genocide against them.

Shortly after his first duel with the Avengers, he traveled to Africa in order to obtain Vibranium from an illegal black marketer and notorious supervillain Ulysses Klaue (known by many as the international terrorist, Klaw), which Ultron intends to use to create a new body. The current king of Wakanda, T'Challa donned his Black Panther attire after hearing the news of Ultron's arrival and assault on his kingdom. He and his kingdom's forces decided to charge and defend the kingdom from Ultron's assault and his sentries. The Panther even successfully apprehended his long-time archenemy Klaw once again (though he manages to escape) and later, he confronted and tries to fight the megalomaniacal machine until his forces was eventually defeated and is close to being killed until the Avengers have arrived, and helped Black Panther retreat and leave Wakanda with the stolen Vibranium, having it under the wrong hands of Ultron.

Then he traveled to Seoul, South Korea, where he used a hypnotizing device based on the Scepter known as the encephalo ray, to force Helen Cho to create a synthetic body made from a mixture of artificial tissue and the Vibranium, this body later is implanted with the Mind Stone and becomes the Vision. Cho, who was rescued by the Avengers, successfully interrupts the download in time, which allows the Avengers to arrive and steal the body. With all his plans of creating a perfect form being thwarted, Ultron decided on a compromise in which he used parts of the remaining Vibranium to create a more durable robotic body while using the rest of the Vibranium to strengthen the core structure of his device, all while continuing to build on his army of Ultron Sentries ready to do battle on anyone who would stand in his way.

The Avengers alongside their newest ally, Black Panther finally clashes with Ultron, and try to destroy all of the sentries and his synthetic bodies so that he cannot escape. Ultron manages to escape into the woods in his last body, where he is confronted by the Vision, the two calmly discuss the nature of humanity before Vision finishes off Ultron by destroying the last body in his impulse, seemingly killing him for the greater good of Earth's unforseen and supposedly unpredictable future, an action of Vision that has revealed to have thankfully averted a much darker dystopian future on Earth ruled by the ruthless killing machinations of Ultron himself.

As for now, it was only revealed that complete fragments of Ultron's consciousness have managed to survive and preserve in a mysterious mainframe located at a computer program in an old and abandoned S.H.I.E.L.D. laboratory, a place that was exposed since the aftermath of Hydra Uprising. After getting locked in the system, he was able to bypass the old security system and has finally hacked into interstellar communication satellites in order to spread his surviving program that is his consciousness to the vast regions of space. As a result, those cosmic seers, most notably the Watchers, who discreetly witnessed perceive many different ways Ultron may survive and worse, evolve to a superior form.

Robotic Physiology: Originally Ultron was a peacekeeping project built by Hank Pym and Tony Stark. But over time he was able to transfer his consciousness to newer upgraded robotic forms he created, becoming more humanoid overtime. Overtime, he built an armada of robotic sentinel forms and primary robotic forms for himself that were all sourced from the his active bases, to which he gradually becomes much powerful and stronger with each new upgrades as a part of his unending quest to evolve into a greater form.

Retrieved from "https://marvelcomicsfanon.fandom.com/wiki/Ultron_(Earth-61615)?oldid=256296"
Community content is available under CC-BY-SA unless otherwise noted.