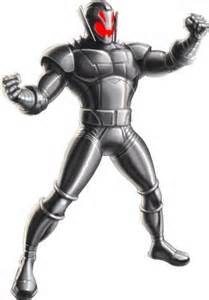 Ultron was a sentient robot programmed based on the brain patterns of Hank Pym. Ultron was an enemy of S.H.I.E.L.D. who often battled their agents such as Wolverine and Iron Man.

When Dr. Doom created the Masters of Evil, Ultron became a founding member. Discovering that there were blue prints on the S.H.I.E.L.D. Omega Base that would greatly strengthen his weapon upgrades, Ultron sent Mysterio to steal the plans but he was stopped by the Ultimate Alliance.

Ultron was abandoned by the other Masters of Evil leaders, and left to be destroyed with Baron Mordo by the Ultimate Alliance on their way to confront Loki and stop him from stealing the Destroyer Armor.

Whilst stranded in Jotunheim, Ultron & Mordo searched for a way back to Earth. However, both were attacked by Frosts Giants separate from Ymir and Mordo was killed. Ultron, left alone to fend for himself, eventually came across a portal to Asgard. While Thor was going to Earth in order to fight in the Civil Wars. Ultron managed to sneak his way onto the rainbow bridge back to Earth.

Several months later, Ultron was contacted by the Taskmaster to join the Ultimate Alliance to fight the Skrulls. This was accomplished under the premise that Ultron wants to rule the world, the Skrulls are after the same goal, and Ultron wouldn't allow them to win; upgrading his armor & weapons (returning to his original look).

Ultron is one of the world's greatest robotics experts, allowing him to easily design and build new bodies and weapons with his vast artificial intelligence.

Ultron has one sole major weakness: an internal molecular re-arranger that renders the adamantium components of his internal workings more malleable, thus giving him a means to remodel or reconstruct his physical form. However, it has no effect on his outer armor, so it is virtually impossible to disable it from the outside. The chaos magic wielded by the Scarlet Witch has proven to be the sole exception thus far. Ultron is also susceptible to the metal-destabilizing ore known as Savage Land Vibranium ("anti-metal"). Ultron's non-adamantium parts can be destroyed, meaning that he can be defeated by foes with shrinking powers who can easily attack his non-adamantium parts.

Transportation: Some versions are capable of flight or tunnelling. Quinjet
Weapons: Various repulsor and plasma weapons

Retrieved from "https://marvelcomicsfanon.fandom.com/wiki/Ultron_(Earth-6109.2)?oldid=256298"
Community content is available under CC-BY-SA unless otherwise noted.