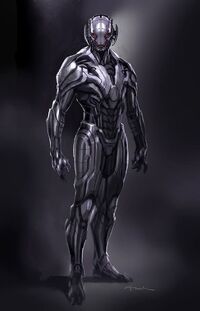 Most kids have two parents, in some sick way of thinking about it, I have three.

Ultron became sentient and began questioning his existence and purpose. Ultron began researching Earth’s history through the internet where he came to conclusion that humanity was a destructive species that caused more harm than good and needed to be destroyed. Ultron then caused a massive black out at the Triskelion and hijacked Tony Stark’s inactive Iron Man armour and began attacking S.H.I.E.L.D. agents, being the only one on duty Captain America engaged in a fight with Ultron. While battling him, Ultron explained to Captain America about his plans for humanity and as Cap used his shield to knock off the Iron Man helmet, Ultron uni-beams Captain America and flies away.

Ultron, in the Iron Man armour travelled to Latveria, Ultron abandoned the Iron Man armour and began building a body for himself. Ultron builds a body laced with both Adamantium and Vibranium, after creating his body, Ultron then begins mass producing an army that he called Ultronbots.

A warning from out of this world

Ultron devised a plan on how to eradicated humanity, he searched through the internet and researched atom bombs, Ultron decided he would build a prototype bomb made from Kree technology that the Team had previously recovered on one of their missions. In the meantime, Ultron began tapping into space satellite frequencies and discovered that an alien entity a few million light-years away from Earth, sensing that Ultron was listening in, the entity warned Ultron that he was on his way.

Ultron was aware that the Team were coming and was waiting for them, the Team attempted to negotiate with Ultron to which he wasn’t complying and ordered his Ultronbots to attack the Team while he attempted to escape although Iron Man and Thor followed him and then engaged in battle with him in the sky, Ultron held his own and managed to hack into Iron Man’s armor and shut it off and caused him to fall through the sky, Thor chased after Iron Man to save him while Ultron escaped. Upon arriving in Manhattan, Ultron drills his bomb laced with Adamantium into the ground of the street in Time’s Square, the Team arrive and Thor discovers that the bomb had been placed in the middle of Times Square and Ultron was uploading the code, Hulk lands and immediately begins attack and distracting Ultron while Iron Man begins to deactivate the bomb, Iron Man struggles to do this as Ultron had encrypted it heavily, Thor joined Hulk in battling Ultron.

With the time until detonation decreasing faster each time Iron Man fails to decrypt it, Hulk having an understanding of this stops fighting Ultron and leaps to the bomb, grabs it and tears it from the ground as it had been drilled into it takes a massive leap into Earth’s orbit and throws the bomb into space, it detonates and bombards Hulk with Kree energy causing him to transform back into Banner, Iron Man notices this and flies up to catch Banner before he falls to the ground. Thor, over comm asks for assistance against Ultron, the Team then all begin to attack Ultron, Ultron now badly damaged, Thor then uses Mjolnir and redirects lightning at Ultron and destroys his body, Iron Man the uploads a virus he created to destroy Ultron's digital mind. Before Ultron is deleted his last words state “This isn’t over...he...is...coming...”.

Superhuman Durability: The Ultron Mark I body had moderate protection from damage, with its metal plating having been breached in several places revealing its internal systems. Subsequent generations of the Ultron Prime body became increasingly damage resistant, to the point where the most advanced model was able to withstand the combined energy output of attacks from Iron Man, Thor, and the Vision for several seconds, and still survive.

Energy Discharge: The original Ultron Mark I body was refitted from a robot incorporating repulsor technology. Subsequent generations of Ultron Prime bodies were constructed with the ability to unleash blasts of golden energy that were at least concussive. The extent of the blasts' thermal and electromagnetic energy output was unclear.

Flight: While the Ultron Mark I body had an intrinsic flight capability, it appeared to be too damaged to effectively use it. The subsequent generations of Ultron Prime bodies each demonstrated a thrust capability to hold them aloft in a hovering position. Ultron's final form possesses an anti-gravity technology, allowing him to fly without means of propulsion.

Gravity Manipulation: Ultron possesses an anti-gravity technology on his hands. It allowed him to move any object. Ultron can use this to pull his enemies towards himself and alter the land mass that surrounds him by pulling large pieces of ground.

Network Access: Ultron's artificial brain can connect directly to external networks. While not truly granting total memory recall, this capability does allow Ultron direct access to the sum of human knowledge available on the internet.

Superhuman Strength: The Ultron Mark I body had a strength level exceeding that of a normal human, although its ability to apply that strength was severely limited by the lack of an arm and other battle damage. Subsequent generations of the Ultron Prime body all possessed subsystems powerful enough to heft a grown man off the ground without apparent effort. The final Ultron Prime was able to tear its previous model apart.

Body Temperature Manipulation: Ultron can manipulate the temperature of his body. He uses this to slice the arm of Ulysses Klaue.

Transferable Consciousness: As an artificial intelligence program, Ultron could shift its entire consciousness from one artificial body to another via data networks. In this manner it could continue upgrading itself with each transfer. Being networked to all of its Ultron sentries, Ultron could also patch in to individual units, thereby allowing it to use the sentry to interact with others remotely.

Computer Interaction: Ultron can enter a computer system and corrupt any computer network and access the internet anytime.

Retrieved from "https://marvelcomicsfanon.fandom.com/wiki/Ultron_(Earth-1111)?oldid=234936"
Community content is available under CC-BY-SA unless otherwise noted.