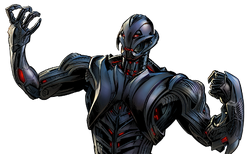 Ultron was constructed by Dr. Hank Pym of the Avengers to help them face powerful threats. He was built along 4 other Ultrons, however, these are noticeably weaker and do not posses the ability to speak. Ultron Prime, however, became sentient and rebelled against his creator.

Ultron has since generally remained a solo operative, being too monomaniacally genocidal to willingly work alongside any human for any length of time. His most notable achievements may be the creation of the "synthezoid" called the Vision, whose mind was based on that of Wonder Man.

Superhuman Strength: Ultron is incredibly strong and can lift at least 100 tons.

Encephalo-beam: Located in the head cavity, the encephalo ray plunges its victims into a deathlike coma. It also allows Ultron to mesmerize and outright control his victims, or implant subliminal hypnotic commands within their minds to be enacted at a later time.

Program Transmitter: Located in head cavity, the program transmitter can project Ultron's entire 3.2 terabyte memory/personality system into some computer systems by means of a collimated, high bit-rate magnetic inductance beam. He can beam part or all of Ultron's programming into remote locations such as computers or alternate robotic bodies. Ultron can often control other machines remotely even if he has not transplanted his consciousness into them. One recent Ultron model developed hive-mind technology, allowing him to animate and control hundreds of alternate Ultron bodies at the same time, becoming a robotic one-man army.

Ultron has created a variety of robots and androids over the years, and while the more sophisticated ones typically turn against him sooner or later, they all feature subliminal programming which allows Ultron to manipulate them if need be (most notably a subliminal command to rebuild Ultron if he is destroyed).

Ultron is one of the world's greatest robotics experts, allowing him to easily design and build new bodies and weapons with his vast artificial intelligence.

All of Ultron's robotic bodies have been superhumanly strong. At present, Ultron is capable of lifting at least 100 tons.

Ultron has one sole major weakness: an internal molecular re-arranger that renders the adamantium components of his internal workings more malleable, thus giving him a means to remodel or reconstruct his physical form. However, it has no effect on his outer armor, so it is virtually impossible to disable it from the outside. The chaos magic wielded by the Scarlet Witch has proven to be the sole exception thus far.

He has designed, built and wielded a wide variety of high-tech tools, weapons and accessories over time, such as his androne-mutation gas.
Transportation: Some versions are capable of flight or tunnelling.
Weapons: Various repulsor and plasma weapons

Retrieved from "https://marvelcomicsfanon.fandom.com/wiki/Ultron_(Earth-1010)?oldid=256297"
Community content is available under CC-BY-SA unless otherwise noted.