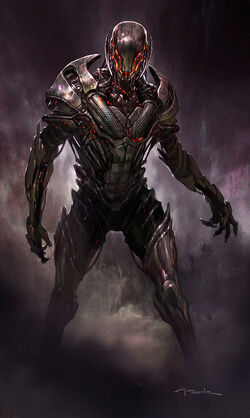 Earth-101
Base Of Operations
Abandoned Sokovian Hydra Base
Characteristics
Gender

Ultron was conceived by Hank Pym as a potential peace-keeping program. When Tony Stark discovered Pym's plans, he became involved and they started building weaponized robotic bodies to bring online as part of the Iron Legion Protocol, which would provide assistance to the Avengers.

However, before Ultron could be activated, Iron Man, Captain America, and Thor returned from the future and discovered Ultron was destined to betray them. Reluctantly, Tony shut off the mainframe and scrapped the project. However, unbeknownst to anyone, Ultron had already grown sentient and was able to escape into the cloud.

He later took over an abandoned Hydra base in Sokovia where he started building an army of himself. He was able to gain access to the Avengers's plans to prevent the future, which inspired Ultron to seek the Infinity Stones for himself.

After discovering the location of the Mind Stone, he retrieved it for himself and stole a supply of Vibranium from Wakanda. He then began the process of creating a new final body for himself imbued with the power of the Mind Stone, which he called the Vision. However, before the process could be completed, the Vision's body was stolen by the Avengers. During the conflict that resulted in Ultron losing the Vision, however, he was successful in killing Hank Pym, which struck a blow to the Avengers, who were then able to overwrite Vision with J.A.R.V.I.S.'s mainframe, turning him against Ultron.

Enraged and desperate, Ultron began searching for the other Infinity Stones, only to be ambushed by the Avengers, which now consisted of the Vision. Forced to enact his final plan early, he unleashed an army of himself onto the city of Sokovia, but was inevitably destroyed by the Vision, who completely erased his mainframe and destroyed his physical body.

Retrieved from "https://marvelcomicsfanon.fandom.com/wiki/Ultron_(Earth-101)?oldid=247894"
Community content is available under CC-BY-SA unless otherwise noted.