Toby describes Ultron's Conscious as high-tech and futuristic, given it was attached to the Internet. It designed Ultron's Software to look like an orange cube, and Toby like a motion captured figure. It holds all the information of the world such as it's database and security system. It is made up of codes and micro-electronic cells that form the billions of data cubes. It is also what connects Toby's brain to Ultron's.

The Avengers: Age of Ultron

When Toby tried to escape his cell, he was apprehended by guards and taken to Strucker, who ordered that he be transported to the engineering laboratory, where Ultron's Software was being kept. The scientists then insert part of Ultron's Software into Toby's brain, connecting them internally, so that Toby would protect the AI's software in case the Avengers ever got a hold of it.

When Toby is through with the Avengers' interrogation, his brain starts to collide with Ultron's, making him have a "vision" of the his Global Software System, or the Internet. The cubes form together to show Toby exactly where Ultron is. This lands Toby and the Avengers in Africa. 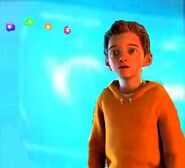 Retrieved from "https://marvelcomicsfanon.fandom.com/wiki/Ultron%27s_Conscious_(Earth-199999)?oldid=221252"
Community content is available under CC-BY-SA unless otherwise noted.