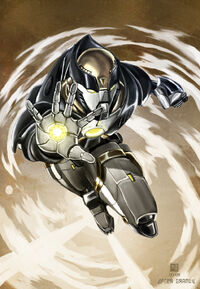 Single
Occupation
N/A
Education
High School Diploma
Origin
Origin
After being kidnapped by Ultron, Tyson Martinez was experimented on till he was infused with Nanobots that combined with his DNA. After turning on his caretaker he was taken into the Avengers Academy, but left due to the ideals of the Academy.
Place of Birth
Oregon, Ontario
Place of Death

Tyson Martinez was born in Oregon, Ontario to two loving parents. During his childhood Tyson was always known by many as the kindest kid in the world. No matter how big or small the problems were many could count on him for help. As the years went by he became a better person who focused on his education, and that led him to graduating High School at the age of 17. and was expected to go to college at California State University of Los Angeles. However, things turned upside down when Ultron returned to Earth in search of test subjects to find the missing clue to evolving beyond Organics and Synthetics. His search led to Tyson, and lead to Ultron kidnapping him after killing his Father right in front of him.

Taking him back to his hideout he ran experiments on Tyson for three days straight. An accident occurred. When an Earthquake shook up Ultron's equipment causing the fusion of the Nanobots injected into his bloodstream to his DNA. Three months later He sent Tyson, who he now dubbed Ultro, to battle the Avengers with two Artificial Intelligence that he dubbed "Zeta and Beta".

After an Epic battle with the Main Avengers Team Ultro was able to regain control of his body along with a new evolution. With his new powers he was invited to join the Avenger's Academy in order to learn how to use his power. However, during his first year he was conflicted with the ideals the Avengers kept. He was later framed for hurting innocent people by Ultron, which later made him realize that when people see chaos they take their blame without evidence. He decided to leave the Academy, and began fighting small-time crime in the gang areas, while also using his increased intelligence to aquire a vast amount of money to initiate "The Unifier Protocol"

Technopathy: - After Ultron's experiments he was bestowed with the power to change the world. Though it is not fully understood Ultro can infuse anything organic or synthetic with his nanobots, and change their entire structure. It gives him the ability to change the DNA of anything Synthetic or Organic. In his mind the concept states "Organic wish for perfection through technology, while Synthetics want perfection through understanding". This phenomenon is considered the final evolution. It has also been shown that he creates new Armor, Tyson can store it in his body, and may use it at later times.

Flight - Like Ultron Tyson has the capability to fly.

Energy Construction- By focusing the energy constantly charging through his body he is capable of creating any energy weapon or attack.

Machine Manifestation - By altering his armor on only his arms or legs he is able to create new modified arms and legs.

Enhanced Intelligence - It has been shown that Tyson was able to grasp nearly impossible equation in less than a minute. Along with that was the incredible intelligence for Cybernetics. It has also been shown he is able to retain much of the information he reads, and can create new inventions for any situation.

Enhanced Strength - Without his Armor he has been shown the capability of easliy bending reinforced steel as if it was a tooth pick. In his armor he has been seen holding up the entire San Francisco bridge with only his two hands.

Adaptation - With the use of his mind the interface of his helmet can analyze material, energies, and fighting styles. Afterwords he can calculate the best way to deal with any opponent.

Magic - It was revealed that any form of Mysticism can hurt Tyson. The only exception to this is Wanda's power of Chaos Realty Manipulation. Dr. Strange saw that Tyson's entire being had what he called "A Halo of Protection" against all chaos.

Overuse of Energy - Unlike like Iron man's armor, which runs on his Arc Reactor, Tyson's energy connects with his entire body like any normal human. He still requires food, water, and rest to recharge his energy.

Equipment: Ultro Armor - When injected with the special nanobots along with a freak accident the end result was a newly created DNA that combined both Organic and Synthetic DNA. Over time the nanobots also affected his entire body causing a Synthesis. The end result was his ability to summon Vibranium-Adamantium Armor as if it was a second skin.The design was originally meant to be a concept of Ultron-5, but after scanning Tony Stark's latest armor he was able to upgrade it, and change it. The Armor itself is the perfected form of Tony Stark's Extremis Armor, which allows much more uses and storage of multiple armors.
Transportation: None known.
Weapons: None known.

-The entire concept of Ultro was based off of Ultron and Bio-ware's Mass Effect 3 ideas.

- Ultro is the second student to quit Avengers Academy, first being Veil. N/A

Retrieved from "https://marvelcomicsfanon.fandom.com/wiki/Ultro_(Earth-616)?oldid=80701"
Community content is available under CC-BY-SA unless otherwise noted.