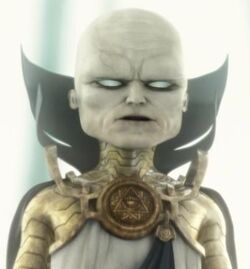 The Watchers, friend and ally of the House of Agon, Fantastic Four and Ultimate Alliance
Relatives
Ulana (wife)

Earth-6109.2
Base Of Operations
The Blue Area of the Moon, Luna, Earth's Moon. Specifically the Watcher's Citadel
Characteristics
Gender

Married
Occupation
formerly the Watcher of Earth
Origin
Origin
One of the Watchers, commanded to watch all over the universe but forbidden to interact
Creators

Little is known about Uatu's life. It can be assumed to be similar to his mainstream counterpart.

After Doctor Doom obtained the powers of Odin and tried to kill Ultimate Alliance, Uatu teleported the Alliance to Attilan.

For saving the team the Watchers judged Uatu for changing reality and they had taken his powers from him. Without any other way to help the Alliance, Uatu told them that in order to defeat Dr. Doom, they would need the M'Kraan Crystal from the Shi'ar and the Muonic Inducer from Galactus. Uatu leaves Attilan sometime after the defeat of Galactus.

Retrieved from "https://marvelcomicsfanon.fandom.com/wiki/Uatu_(Earth-6109.2)?oldid=128949"
Community content is available under CC-BY-SA unless otherwise noted.