In order to see the Skrull font properly, please download and install the following file: File:Skrull-Regular.ttf

Hulkling got inside the Marvel with Noh-Varr and Prodigy.

-My name is Bereet.- She introduced herself.

-You can call me Kate. C’mon, we’ll give you a lift home, follow us.- The leader of the Young Avengers smiled, as the two regrouped with Noh-Varr and Hulkling and ran out of the room.

As they were exiting Xandar’s orbit, they were approached by a Skrull ship.

-Oh, dammit.- Noh-Varr muttered, trying to avoid it. -Exactly. Fasten your seatbelts, children. This is going to be a bumpy ride.-

-Get ready to make a hyperspace jump!- Noh-Var said, pushing buttons on the panel before him.

-Is it safe to do one right in front of another ship?-

-I’ll try to outmaneuver them.-

-Are you trying to get us all killed?- Hulking asked.

-We’re going to die either way.-

-Actually, the odds are…- David started.

-Never tell me the odds.- The Kree replied, focused on his piloting.

-No regrets.- Alleyne smiled, looking up at the alien.

One of the ships fired a grappling hook, holding the Marvel.

-They got us. If we make a jump, they’ll be right after us.-

Another ship fired its hook.

-There goes another one.- Hulkling looked outside the window.

-What if they make a hyperspace jump?- Bishop inquired.

-They’ll drag all the other ships along. They wouldn’t do that.-

-What if they all make the jump at the same time, to the same place?- Prodigy wondered.

-Dammit.- The Protector realized that the mutant was right. -Brace yourselves.-

-We’re going to Tarnax IV.- The Kree looked at his allies, as more grappling hooks were thrown at his vehicle.

Once every hook was in place and Noh-Varr had no further maneuvers to set the Marvel free, the Skrulls inside their ships prepared for a hyperspace jump.

-Coordinates ready?- General Kalamari, the leader of the operation, asked the others, who responded affirmatively. Pushing on a small lever, the vehicles disappeared from sight, as the Marvel followed tightly locked to them.

After noticing they had landed, Prodigy and Hulkling looked at Kate for instructions.

-Stay on target. Trust your training.- She told them, as the door of the ship was forcibly opened by two War-Skrulls.

-What did he say?- Bishop asked Noh-Varr.

-Start walking.- The Skrull repeated himself, this time in English, and the teenagers started walking, followed closely by the soldiers.

The heroes where led to the Throne Room, where two Skrulls were waiting for them. One had taken the form of a female, while the other had that of a male.

-Welcome to Tarnax IV.- The female smiled at them, as she turned around to face them. -Especially you, Prince Dorrek VIII.- She said the word “prince” between her teeth, almost resenting the fact.

-Who are you?- Hulkling inquired.

-I am Queen Veranke, ruler of the Skrull Empire.-

-What happened to my grandfather?- Teddy asked, clenching his fists.

-Did you kill him?- Noh-Varr looked at the Skrull.

-Quiet, Kree.- She hissed bitterly. -I am not talking to you.- Then, she turned to Hulkling. -No, I did not do it. Your grandmother did. Afterwards, she was incarcerated and since your mother is no longer with us… I assumed the throne.-

-I thought you knew, Dorrek.- She said, placing her green fingers on his cheek. -After she gave you to her nursemaid, she was executed for treason. By her own father.-

Hulkling fell to his knees, as both Kate and David put their hands on his shoulders.

-You see, Dorrek.- She walked to him and looked down at the heir to the throne. -Ruling a whole empire requires… Objectivity. It requires to follow rules… Protocol… Even if it is your own family who went against it.-

Suddenly, Hulkling looked up. -But I am alive.-

-Indeed.- He smirked. -I am the last living descendant of Emperor Dorrek VII. I am the Heir to the Throne, not you.-

Veranke smiled evilly. -At first, we captured the ship looking to weaken the Kree military, but we were given a surprise. The last living descendant of Dorrek, as you correctly pointed out.-

-And you want to wipe him out…- Prodigy muttered.

-You are smart.- She turned to the mutant. -For a Terran.-

-Don’t try it, bro.- Kate pulled out the Kree Composite Soul Bow and aimed it at Veranke, who chuckled.

The Super-Skrull stretched himself inside the room, standing next to Veranke and Pagon, her lover and the Skrull in the room with her.

-I wouldn’t do that if I were you… Kate…- The Super-Skrull smirked, shapeshifting into Stature.

The Super-Skrull turned his right arm into rock form and punched her stomach, pushing her away.

-Kate!- Noh-Varr yelled, activating his Nega-Bands. -You are going to wish you hadn’t done that!- He yelled, opening fire at Kl’rt, who created a force field around himself and the other two Skrulls. Then, he turned at Prodigy. -David, the bow! It can…-

-Penetrate the shield!- Alleyne finished his sentence and leaped towards the bow and cartwheeled after landing, grabbing it with his left hand. Absorbing Kate’s skills, he aimed it at the Skrulls and opened fire, hitting Pagon’s chest.

-Pagon!- Veranke exclaimed, crouching to check on her partner.

Standing up, Hawkeye looked at her friends. -Let’s get going.- She ordered.

-But… She’s going to keep the throne.- Hulkling argued

Dorrek looked down and nodded. Then, he looked at Veranke. -We will see each other again, Queen.-

-And when we do… I’ll kill you. Like I killed your grandfather posing as your grandmother.- She smirked evilly.

-YOU DID WHAT?!- Teddy lashed out at her, tears rolling down his face, as his friends held him back.

-The former Emperor tried to kill you, Dorrek. He killed your own mother. And I cannot let you rule… You’re a Kree.- She spoke the last word as if it was an insult.

-I HAVE TO KILL HER!- He screamed, trying to free himself from the other Young Avengers.

-Plex, knock him out!- Noh-Varr ordered as they approached the Marvel. Suddenly, the hybrid was unconscious in their arms.

-How does she do that?- Kate inquired.

-She possesses all of the powers of the real Supreme Intelligence…- Noh-Varr started explaining.

-Who in turn possesses every form of psionic power.- Prodigy finished his sentence.

-I am liking this dynamic.- The Kree laughed, as they got inside the ship and took off.

Later, Queen Veranke was looking at a screen displaying another Skrull looking exactly like her communicating with her live.

-I encountered Prince Dorrek VIII, my Queen.- The one standing in Tarnax IV informed the other.

-That is interesting.- The other nodded. -How did that go?-

-As expected. He realized that I was trying to kill him, so that was not smooth at all. Even Pagon took a hit.- She said, as the War-Skrull approached her.

-Oh, my poor Pagon. Soon we will be reunited. You will join me here in no time.- She told her lover and then looked at the Skrull posing as her. -Lyja, thank you for protecting my throne with such… Passion.-

-It is, indeed.- Veranke replied. -Everything is going according to plan. Soon, having killed Dorrek VII will be fruitful.-

-Did you kill him because he… Because he opposed the… Invasion?- Lyja asked.

-I should not be answering this, but you have proved your loyalty…- Veranke looked behind her. -Yes. The invasion has already begun. When the Kree realize, Earth will be ours.-

Suddenly, some voices were heard behind the real Veranke.

-I have to go.- She said, stopping the communication.

Kl’rt, the Super-Skrull, was listening behind the door. -I need to warn Prince Dorrek…- He whispered.

"Are you trying to get us all killed?" 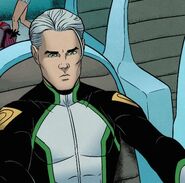 "Never tell me the odds."

"You are going to wish you hadn’t done that!"

"Yes. The invasion has already begun. When the Kree realize, Earth will be ours."

"I have to go."
Add a photo to this gallery

Retrieved from "https://marvelcomicsfanon.fandom.com/wiki/U_Got_the_Look_(YA)?oldid=218568"
Community content is available under CC-BY-SA unless otherwise noted.