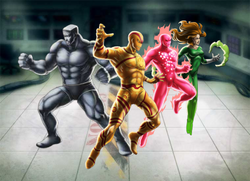 In an attempt to duplicate the creation of the Fantastic Four, these four power-hungry individuals became the super-criminals known as the U-Foes.

Retrieved from "https://marvelcomicsfanon.fandom.com/wiki/U-Foes_(Earth-1010)?oldid=100130"
Community content is available under CC-BY-SA unless otherwise noted.