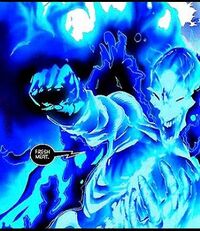 Onslaught finally found Warlord, who gave him a proposition, either kill him or kill Crimson Shadow and his family. Onslaught decided to put aside his differences with Warlord, so he could get his revenge on Crimson Shadow. A fully charged Onslaught and Warlord found Misery and came to their aid. Then Captain X showed up to help Tyson and Weapon Omega. Onslaught immediately charged Crimson Shadow, Warlord went after his son, and Misery lunged at Weapon Omega. While fighting Tyson, Onslaught knew that this was his chance to kill his two enemies. Onslaught created a ball of energy, but it was unstable and it started to pull him in. Others were pulled in to and the ball imploded. Everyone was severely injured and unconscious. Soon afterward, S.H.I.E.L.D. arrived on the scene and took the villains and the heroes away. Onslaught was put in a cell in the Negative Zone.

While in his cell Onslaught heard a commotion outside. The next thing he saw was his cell door being ripped off. Warlord had released him and told him that it was time to get their revenge. Once free, Onslaught ignored Warlord and attempted to leave the facility on his own. He nearly tore down the building and was attacked by many guards. They did not survive and Onslaught continued through. After escaping the Zone, Onslaught hid himself, so he could complete his master plan that would annihilate the Earth.

Onslaught had been tracking an object that was coming towards Earth. It was a small living planet and he knew what it was capable of. He would ally himself with the planet and use it to destroy Earth. Onslaught went into space and waited for it to come close. The planet was metallic and Onslaught landed on it. The planet absorbed him, as Onslaught intended it to. The planet had no one controlling it, so it started moving like an asteroid. The controller of the planet could create copies of themselves out of the planet, with equal power levels. In order to keep in contact with the copies, he had to release signal beacons where he was going to send them. Onslaught released the beacons all over the Earth. Then he created a copy of himself and sent it down to New York City.

While his copies were killing Crimson Shadow, Onslaught decided to make more and send them throughout the country to see what would happen. He also saw this as the perfect opportunity to kill Warlord, so he sent two copies of himself to track Warlord down and kill him.

After his loss in the war, a weakened and dying Onslaught resides in custody within the Negative Zone.

Retrieved from "https://marvelcomicsfanon.fandom.com/wiki/Tyson_Rios_(Clone)_(Earth-616)?oldid=223299"
Community content is available under CC-BY-SA unless otherwise noted.