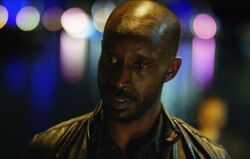 Barrett was given the job of transporting a group of young women in a cargo holder to be used as prostitutes. When the girls would not stop screaming, Barrett held a gun at their heads and threatened them. Before the girls could be taken away, Barrett and his men were attacked by a man in a mask; although Barrett fired his gun at his attacker, he seemingly dodged the bullets before knocking him out and rescuing the girls.

When John Healy was hired by Wilson Fisk to assassinate a rival mobster, Barrett supplied him with a gun. While Barrett enjoyed commenting on the smell of a new, unfired handgun, Healy argued that the guns were not up to standard, mentioning he preferred revolvers as there was no chance of them jamming. Barrett however assured him that the guns had his seal of approval and would never jam.

Barrett visited Vladimir Ranskahov as he was cleaning the corpse of his murdered brother Anatoly, Ranskahov asked Barrett what information he had for him. Barrett revealed that someone who he knew from Ryker's Island, now working as a mechanic, had had an SUV come in for cleaning covered in blood and brains; the person who owned it was apparently a large framed bald white man. Ranskahov asked if the man was Wilson Fisk but Barrett could not confirm the name; he also claimed that the man claimed to be close to the man in the black mask. With this information Ranskahov became convinced that Fisk was working with the man in the mask and declared war with his former employer.

Barrett later met with James Wesley and received his payment for leaking the information to Ranskahov. Wesley thanked him for his work before Barrett questioned why they needed to trick Ranskahov instead of blowing him up from the start, Wesley explained they need Ranskahov to be emotionally off balance as it led to his predictable actions of gathering all his men together in his warehouses, allowing for Wilson Fisk to arrange for them to be killed. Barrett noted he was always impressed and happy to work for a man with a plan like Fisk.

What're you beating on me for? I ain't done nothing!"
"It's not about you, I want information."
"What do I look like? Public damn library?

--Turk Barrett and the Masked Man

One night, Barrett was attacked by the masked man, but was able to escape and went on the ran through the city; the masked man continued to chase him however. Barrett ran up a rooftop and attempted to shoot his attacker but when Barrett attempt to jump to a second rooftop, he fell hard on the ground and was caught and disarmed.

Barrett was told that if he went for any of his back-up weapons, the man would either break his arm or throw him off the roof, not wanting either situation to happen, Barrett surrendered. The man asked Barrett who supplied Wilson Fisk with his body armor, when Barrett claimed to have no idea the man picked him up and threatened to drop him off the roof. Terrified, Barrett revealed the name Melvin Potter who he believed was the man who made the suits and gave him the location of Potter's Workshop.

When Wilson Fisk's organization's true intentions were discovered by the media and the FBI due to Carl Hoffman's testimony, Barrett's part in Fisk's plans was revealed. The FBI was sent to arrest everyone associated with Fisk, including Barrett. Knowing he was caught and would be sent back to Ryker's Island, Barrett attempted to escape, running as fast as he could away from the FBI agents who were hot on his heels and jumping over the police cars, but in the end he was knocked over by a police officer and arrested.

Another Brawl with Daredevil

Having escaped from jail once again, Turk Barrett went to collect money from one of his clients who owed him. However, almost immediately after he arrived, he was ambushed by Daredevil who at first threw one of his batons at him before smashing through a window and fighting the mobsters inside before beating Barrett almost to death.

Turk was once again selling guns to potential buyers but was intercepted by Daredevil. He forced Turk to tell him information he heard from a man on Ryker's Island regarding Wilson Fisk's stolen ammunition. After this, Turk pleaded for Daredevil to release him, to which Daredevil refused and threw away Turk's car keys. Turk then mentioned he would be out by the end of the month and was knocked out unconscious with Daredevil replying that he would see him on that day.

Retrieved from "https://marvelcomicsfanon.fandom.com/wiki/Turk_Barrett_(Earth-1010)?oldid=192595"
Community content is available under CC-BY-SA unless otherwise noted.