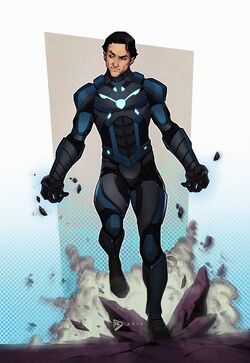 Apocalypse is right! We have the power of Gods! Why shouldn't we be treated like them?

Truman Valesca was born to an alcoholic, deadbeat father, and an overworking, neglectful mother. He wasn't very distraught when Apocalypse's forces besieged his home, he was rather pleased to find out he was being taken into the training center. Being taken under the tutelage of Mister Sinister, Truman learned how to hone his geokinetic abilities, hoping to one day become one of Apocalypse's most trusted soldiers.

However, when the X-Men staged a raid on the training center and liberated several of the young mutants, Tecton found himself going with them, under the direction of Sinister. Adopting an outgoing and exuberant personality, he quickly gained the trust of the other X-Men, especially thanks to his training against telepaths to keep out the likes of Jean Grey and Emma Frost.

However, Tecton's hubris would go on to be his downfall. He was caught in a lie by his fellow escapee, Incubator, and had his mind probed by Jean Grey, breaking past his telepathic blockade. Once the truth had come out that he'd been informing on the X-Men. Cooler heads wanted to keep him as a prisoner, or perhaps send him back to Apocalypse and use him for their own means, but those cooler heads did not prevail. Sabretooth was enraged that the X-Men had been betrayed again, and attacked Tecton. They became locked in battle, only for the more experienced Sabretooth to slash his throat open and watch as he bled out.

Retrieved from "https://marvelcomicsfanon.fandom.com/wiki/Truman_Valesca_(Earth-9999)?oldid=245843"
Community content is available under CC-BY-SA unless otherwise noted.