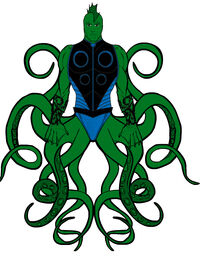 Triton Mazur was born as the first son to the Attilanian Royal couple of Earl Mander Mazur and Duchess Azur Mazur. Triton grew up in a comfortable royal life, excelling in athletics and was considered rather attractive in his early teen years. He was a very adventurous, confident, and slightly cocky boy. At age 15, Triton underwent his Terrigenesis ceremony. To many's surprise, including his own, Triton received drastic, aquatic physical mutations, including green, scaly skin, gills, and tentacles, which replaced his legs. Aquatic mutations in Attilan were unheard of for many generations. Unknown to Triton, his Terrigenesis sparked whispers of conversation about the Atlanteans among the Genetic Council elite.

Triton had a very difficult time emotionally coping with his new appearance and powers. He felt very different and almost like a freak. Since it was quickly discovered that Triton could not breathe out of water for very long, extended periods of time, Triton had to remain isolated in a reservoir beneath the Royal Palace. During this time, Triton and Crystal grew closer in friendship, as she was restricted to remaining in the palace as well.

Mander Mazur, as the current head of the Attilanian religion, dealt with Triton's unusual transformation through prayer and reflection. He came to the conclusion that, while difficult to understand why it had happened at the time, Triton should embrace his Terrigenesis and await the gods' plans for him. Azur Mazur, on the other hand, could not accept what she saw as doing nothing for her isolated, lonely son. She enveloped herself in research dealing with ancient aquatic mutations in Attilan's royal archives. After years of laboring research, Azur, along with Vinatos (the apprentice of Galen, who received genetics and technology education and training from Galen, as well as from the rest of the Genetic Council), discovered, tinkered with, and re-purposed an ancient Kree breathing apparatus technology. This breathing apparatus prototype was only ready to be tested after Crystal had fled Attilan. As a prototype, it allowed Triton to breathe out of water longer than he could before, but not indefinitely.

Once returned to Attilan, Crystal was confronted by Triton, who felt, in a sense, betrayed and abandoned by her. Shortly afterwards, the Fantastic Four tracked Crystal and the Royal Guard back to the lost city of Attilan.

Triton is the Nexus version of Triton (Earth-616)

Retrieved from "https://marvelcomicsfanon.fandom.com/wiki/Triton_Mazur_(Earth-515)?oldid=255316"
Community content is available under CC-BY-SA unless otherwise noted.