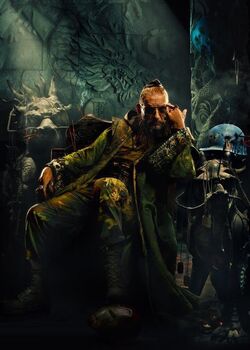 The Mandarin, The Master
Identity

Black
Unusual Features
Facial features modified by plastic surgery, neck tattoo of Captain America's shield with the anarchist "A" instead of the star
Status
Citizenship

The second you give evil a face, a Bin Laden, a Gaddafi, a Mandarin, you hand the people a target.

Trevor Slattery was a struggling British actor, whose Lear was once said to be the toast of Croydon. By the late 1980s, he was in the United States filming a pilot for the CBS network called Caged Heat, in which Trevor portrayed a Russian cop who immigrated to the United States. The shooting caused Trevor to miss his mother's funeral, and the network passed on the pilot. After this, Trevor began to blame his lot in life on a series of unfortunate events rather than taking any responsibility himself.

While living on streets, doing things for money to feed his drug habit, Trevor was taken in by Aldrich Killian and offered lavish accommodation and an endless supply of drugs, alcohol, and prostitutes, in exchange for some less-than-reputable acting work. Killian had him pose as a terrorist known only as "The Mandarin" in a ruse to give enemies a false target, and the world an enigma to fear.

In his role of the Mandarin, he was the public face for the terrorist organization known as the Ten Rings, although this was simply another ruse. The real Ten Rings had already been crushed, and Slattery's 'terrorists' were just another part of the act.

His performances were used to threaten and warn the American people of his plans against the United States. In one video he announced that the Ten Rings were responsible for the explosion at the Mann's Chinese Theatre in Hollywood, California. In another video he threatened to kill an accountant from the Roxxon Oil Company if President Ellis of the United States failed to call him within 30 seconds. Although the president complied with the request, the Mandarin ignored the call and, in a mock execution, pretended to shoot the man in the head.

Slattery's extravagant lifestyle came to an end one day when Tony Stark, the sometime vigilante known as Iron Man, invaded the mansion the Mandarin was residing in. When pressed for information, Trevor told him that the whole thing was just theater all along, and that the Mandarin was just a role he plays in return for the lavish lifestyle, a speedboat and a copious amount of drugs.

He drunkenly gave up what little information he knew of Killian's plan, denying what he had divulged immediately after, and then went back to his slovenly habits for a few hours. Stark returned with his friend, Colonel Rhodes, who had been vainly searching the Middle East for the phantom terrorist, and who accosted him once more on the subject of the Mandarin and Killian.

Slattery was apprehended shortly thereafter by local law enforcement officers, and was led drunkenly away through a crowd of onlookers and press.

Some time later, Trevor Slattery was imprisoned at Seagate Prison. Slattery's celebrity following his arrest led to him having a considerable reputation in jail, building up a posse that included Herman and Fletcher Heggs. He was broken out of Seagate when he was abducted by Jackson Norriss, an agent of the Ten Rings posing as a documentary filmmaker, who wanted Trevor to meet the real Mandarin, as Trevor had stolen his name.

Retrieved from "https://marvelcomicsfanon.fandom.com/wiki/Trevor_Slattery_(Earth-1010)?oldid=137242"
Community content is available under CC-BY-SA unless otherwise noted.