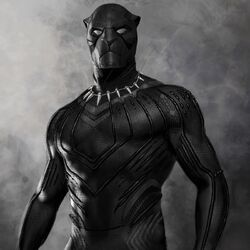 Tremaine Charles is the son of an American drug lord and a Wakandan villager. He was smuggled into America by his father as a baby, and was rendered mute after a lab fire in his father's compound. In the chaos, Tremaine ran away from his father and ended up being forced to be a smuggler for a rival gang. After reluctantly serving them for years, Tremaine burned down their entire operation and went into hiding, where he was found by Potts International. They offered him a way out of the horrors his life has been since birth.

Accepting their offer, Tremaine was put through the process of Terrigenesis, and when he emerged, he discovered he had been gifted with cat-like agility, as well as the ability to travel through dimensions using something called Darkforce. Panther was placed on the Squadron Supreme, but also serves as Juniper Potts's personal assassin and fixer whenever she needs him.

Retrieved from "https://marvelcomicsfanon.fandom.com/wiki/Tremaine_Charles_(Earth-1515)?oldid=244649"
Community content is available under CC-BY-SA unless otherwise noted.