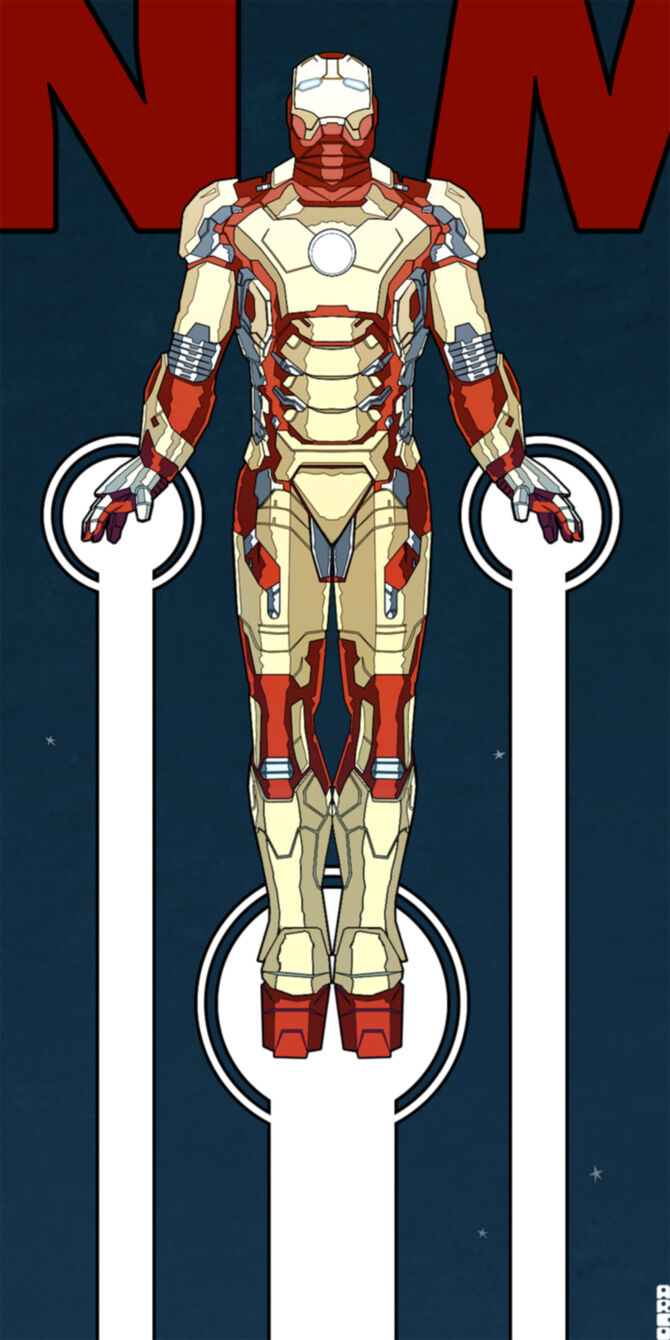 Stark: Sometimes I wonder which is the real me... this splendid metal skin I`ve created or the frail thing of flesh that wears it. Either ways, I have conquered the best of both sides...
THE MAN BEHIND THE MASK

At age 16, Tony Stark enrolled in MIT. By 21, he was running of the largest companies in North America. Anthony Tony Stark has always been ahead of the pack, the curve, and his time. Although he had such admiration, fame and intellect, why did he turn to villainy? Why was he so obsessed with the deaths of the ones he truly disfavours? Even if Tony has contributed to the society of technology, warcraft or science or even physics or cosmology, Tony has one irreplacable side, a darker one that frequently lands others into deep waters.

This article surfaces around Iron Man, from birth to the current state, to his physical advantages to his most trivial and notable details.

Getting Grasp Of Revenge

Tony Stark was a dreamer. Unfortunately, there was a quality and his father didn`t share. While young Tony built iron men out of erector sets and fantasized about ancient times of King Arthur and the knights in shining armor, his father found escaping stress by a fine whisky bottle. However, although his father and he had not a good chemistry, Tony had always admired his father for his tolerance and patience. At the age of 16, Tony Stark`s parents were killed in a car accident which he witnessed and came to understand, that it was not a car accident! Witnessing his cruel uncle murder his father and mother in cold blood without any proof, Tony became mentally unstable and was put under a mental asylum in New Work for three years. After being released, Tony completed his education, with high honors, and set out for revenge. Killing his uncle by the same way his uncle killed his parents, Stark was gifted the Stark Industries and at the age of 21, was given the responsibility to control the whole industry, that expands every day.

At the age of 28, Stark got his first big break after the creation of a prototype of an artificial intelligence programme, implanted in chips, that could communicate and contact people, in need of services. With this A.I called 'Jarvis' created, Stark earned millions of door from the military.

After deciding to extend his mind`s territorial aspects, he grasped the idea of a physical mechanism that would be a prototype of an A.I that could do any physical task, like the common househould operation. Thus, he created the world`s first armor that could trivially fly, or do any physical movement, or answer common questions for household operation.

Overseen by the military, Colonel James Rhodes signs a contract with Stark, of using those 'Iron Man Machines' as government properties. Authorized to go to Israel to promote their works in the midst of a war between them and Gaza, Stark, along with his team of Dr. Izekiel Raza and four other military liasons, are ambushed by an unambiguous terrorist force that trap them in a cave. When Stark learns that they are being held hostage by the Ten Rings terrorist community of the international fugitive, Mandarin, Stark has a nervous breakout and causes a furious gunfight in their hostile cave. Determined to escape, Raza and Stark recover their research materials including the Iron Man Household armor, which they, uncannily upgrade into a form of a war machine. The Ten Rings unravel their plan; the Mandarin wants Stark`s exclusive technologies, that`s why they were kidnapped. Stark and Raza attempt to evacuate the area but Raza is shot down and murdered but Stark escapes and is stranded in the middle of a dessert, bloody, turning on his GPS emergency collar, to alert that he is danger.

Waking up, Stark is distressed by his sudden nervous breakouts, and thus, the amount of pressure, his brain was cooking up, caused him a brain hemmorhage, making him have split personalities; one an intelligent and a weary Stark, the other, a selfless, reckless and an imbecile man with no knowledge of anyone or he, himself and just violently attack others. Their project of 'International Iron Man' was foiled, but Colonel Rhodes reversed engineered Iron Man Mark I to create a literal war machine. Inspired by his own creation 'plagarized,' Stark, selflessly creates prototypes of his armors, each upgrading itself. Having built this after three whole months, Stark uses these to go around the city. But after Colonel Rhodes learn about this new scenario, he instantly reacts, and Iron Man and the War Machine, get into a fierce battle together. Soon, Tony`s reckless subconscious personality severely damages Rhodes by altering the War Machine suit and making it self explode.

After suffering from a head trauma, Rhodes develops amnesia and is surpressed to quit the military and is forced to be in his apartment quarters. After returning back to his mental state, Stark realized that for his ego, Rhodes had to perish. Thus, exploiting the truth to Rhodes about the Iron Man confidential operation, he felt better. Without any official`s authorization, Stark became Iron-Man, after witnessing violent acts of murder or sexual surpressions. But what he became was worse than Frankenstein.

Only the military, Rhodes and Jarvis knew of Iron Man`s real identity but did not hesitate to leak any information, as the situation was highly classified and a confidential saga. The military decides to eliminate Iron Man, and thus, they send some authorized assasins to execute him, The Winter Soldier and Bullseye. The two hired men are defeated by Iron Man but when Tony Stark discover that the military wanted his dissapearance, Stark became sentient, and caused an all out attack on New York, without anyone knowing it was him. With succession in framing the military of the originations of this plight, Stark is safe from any dangers, after the military task forces are swapped. But Rhodes hesitates and decides to reconcile with Tony himself. Rhodes discovers Tony`s darkest secret, his secret obsession of revenge against the government even after his 'services' towards the country. Stark was going to create manipulative sentients that consisted of nuclear reactors and giant electromagnetic repulsor beams. Rhodes tries to convince Stark to not get carried away, but Stark continues with his rubbish again, and Rhodes shoots Stark, finally, detaining him, Rhodes escape. The following morning, Stark wakes up in an amish hospital, a mental asylum, designated by the new governmental task force. Enraged, Stark realizes that he has to be perfect in all the ways because humanity is too flawed but he can make an exception and since he was being considered as a negative figurine, Stark decided to become the best of all negatives in the world, commanding his sentient robotics to wipe out the military base of America, Iron Man was publicly, converted into an evil aligned supernatural. Thus, Stark`s creations became the most mordern prometheus, the Frankenstein protocol was unlocked. With the database of the U.S Military Campsite destroyed, Stark got away with any connections with Iron Man (after assasinating some government officials as well) and now, operates his suits in a secret underground facility, revolting against the ones who revolt against him.

POWERS AND ABILITIES
THE SUIT

They say the clothers make the man, and Tony Stark would have no reason to argue. Iron Man`s actions make him as a hero, but his armor is what gets the job done! Chest Plate The Iron Man chest plate has been of special importance to Stark over since he donned his first armor. It is physically designed to keep a terminally susceptible heart functioning, biometaphysically. By the use of an electromagnetic field generator, the chest piece was soon adapted to serve as one of the many offensive tools in Stark`s aresenal. Capable of firing a blast similiar to that of his repulsors, the unibeam can also function as a searchlight able to project in nearly every spectrum, even infrared and ultraviolet. The unibeam can also produce a local electro mmagnetic pulse, a laser beam, holographic images and a wavelength scanner.

Jet Boots Also ultilizing the repulsor technology, Iron Man`s jet boots have often played a vital role in his adventures. Powered by a scramjet and air-jet propulsion systems, as well as the afterburner thrust, the jet boot`s are the armor`s main utility to Mach 8. In earlier models, Tony installed magnetic sunction cups in his boots to allow him to do his best impression of Spider-Man and adhere to flat surfaces.

Artificial Intelligence Headset Gear Along with the core head cellular verbrante, Stark implanted a mini temperature adaptible computers with a holographic screen. This computer was controlled by chips and radio transmittive signals. These were all operated by A.I Jarvis, under Stark`s command. If in range of American nations, the armor would have a high speed internet connection with no buffers.

Arsenal Connection His other arsenal included triobeam propeller guns, F22 Calliber rockets, Stainless Steel Samurai Blade, folded within his vertebrate armor storage, and a ozone depletable greenhouse gas with the amalgam of poison, that can blind people outside of his armor in a 20 m range.

TRIVIA AND NOTES
Retrieved from "https://marvelcomicsfanon.fandom.com/wiki/Tony_Stark_(Earth-7764)?oldid=107530"
Community content is available under CC-BY-SA unless otherwise noted.