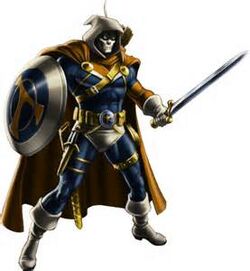 Little is known about Taskmaster's life before the Secret Invasion. It can be assumed to be similar to his mainstream counterpart.

He somehow found out about the Skrulls and started hunting them down. He tracked down the Blizzard Skrull to Washington D.C. There the Skrull crashed a meeting debated the modifications to the SRA. Taskmaster dispatched along with Spider-Man, Wolverine, Hulk, and Deadpool. The villain reveals what's going on, and heads off to kill more Skrulls in D.C. He comes across the squad again fighting a Daredevil Skrull & She-Hulk Skrull with the Rhino. He decides on a temporary truce with Rhino to take down the rest of the Skrulls.

On a search for the real Daredevil & She-Hulk: S.H.I.E.L.D. gets a lead from, surprisingly, Vulture. Taskmaster contacts the Sinister Six, and Doctor Octopus is willing to spare Sandman. The squad is also joined by Cable, Kraven the Hunter (hired by Taskmaster), and Penance. Once sneaking inside: Taskmaster, Captain America, Spider-Man, and the Rhino finds Skrulls with Vulture, Cable (recently), and Daredevil captured; and She-Hulk has been moved from the facility. After freeing the superhumans, a fight ensues across the facility, with the Vulture impostor taken down, but the Cable Skrull escape. However, a Ghost Skrull confronts the team. Upon his defeat, the Ghost Skrull reveals that the Skrulls have infiltrated every superhuman organization by this point.

Retrieved from "https://marvelcomicsfanon.fandom.com/wiki/Tony_Masters_(Earth-6109.2)?oldid=158412"
Community content is available under CC-BY-SA unless otherwise noted.