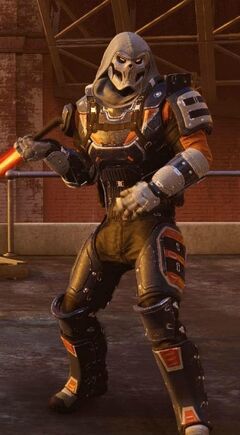 Tony Masters was gifted with mnemonic power which he discovered when he was eight years old. He was watching a cowboy cartoon where a farmer lassoed a cow, which he recreated, but better. At thirty-one years old he joins SHIELD. After a mission in Symkaria he found a memory serum which he injected himself with, becoming a criminal and forgetting his wife Mercedes. Later, he joined an unknown organization and clashed with the Avengers.

Super-Soldier Treatment: Tony underwent extensive experimental treatments, including surgery and steroids, to become a genetically-enhanced "super-soldier," similar to those of Captain America's, the only difference is that his abilities are less advanced than a normal super-soldier's, although it permanently enhanced Tony's bodily functions to beyond the peak of human potential.

Taskmaster suffers from amnesia, and has bad memories which make him weaker

Retrieved from "https://marvelcomicsfanon.fandom.com/wiki/Tony_Masters_(Earth-609)?oldid=245319"
Community content is available under CC-BY-SA unless otherwise noted.