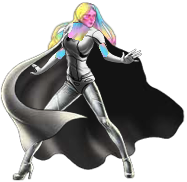 Tommy was a young Morlock. She was out on a date with the Hellfire Club mercenary Richard Salmons, where the Marauders. Richard begged Tommy to run away and she did so, abandoning Richard, who was soon afterwards killed by Harpoon.

Tommy was trailed by some of the Marauders to 'The Alley', the Morlock home in the New York sewer tunnels. Just when Tommy got into the tunnels, she was killed by Riptide. She was therefore the first person to die in the Mutant Massacre.

Two-Dimensional Form: Ability to render herself into a two-dimensional state in which her body was as flat as paper.

Retrieved from "https://marvelcomicsfanon.fandom.com/wiki/Tommy_(Earth-1010)?oldid=173789"
Community content is available under CC-BY-SA unless otherwise noted.