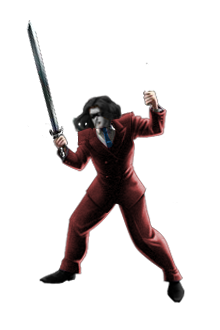 At two weeks old, Tomi Shishido said his first sentence. At three months he could walk. On his first Birthday Tomi could read and write. At age four he was ranked among the top five artists in modern Japan. At the age of six Tomi tried to kill himself for the second time and had composed his first opera. Young Tomi also devised a mathematical formula that proved, without question, the existence of God. Tomi was thirteen when he noticed that he was a mutant. His eyes project energy that turns whatever they hit to stone. He called himself Gorgon.

For years Gorgon was a member of the mutant death cult called The Dawn of White Light and subjected Japan to many terrorist attacks. By age 18, he killed his family and friends to became a member of The Hand. After finding the Hand sanctuary and slaying all of its guards while blindfolded, Gorgon went inside and pledged his allegiance to the Hand's Jōnin. When the master questioned his dedication, Gorgon impaled himself with his own sword, fatally injuring himself and told the master to resurrect him. The Jōnin were impressed and brought him into the fold. They brought him back from death and he worked as one of their best warriors.

The legendary Hydra agent known as the Kraken provided the Godkiller Sword blade to Tomi at his home in Kobe. Gorgon asked why he was given such a valuable thing and the Kraken replied "Who am I to deny a man his destiny?" and left.

It is revealed that Gorgon became connected to Hydra.

Gorgon is not immune to his own powers. Should he see his own eyes in a reflection he will turn to stone.

Equipment: Sunglasses: Gorgon always wears a pair of dark sunglasses that completely obscure his eyes, enabling people to look at him without being turned to stone as the glasses block this ability. Whether the sunglasses are composed of some special material or are simply a pair of ordinary sunglasses is unknown.
Transportation: Madripoor: Atop the brow of a centuries old Dragon Beast near the size of it's continental neighbor.
Weapons: Swords: Gorgon almost always carries and uses a Japanese katana in combat situations. While he has access to the advanced technology of the Hand, Hydra, and Dawn of the White Light, he prefers close quarter combat.

Godkiller Sword:Gorgon carries a powerful blade called Godkiller that can inflict mortal wounds even to mythical beings and gods. This powerful artifact was given to him by the Hydra commander Kraken.

Retrieved from "https://marvelcomicsfanon.fandom.com/wiki/Tomi_Shishido_(Earth-1010)?oldid=171354"
Community content is available under CC-BY-SA unless otherwise noted.